The 42-year-old, who has witnessed several high profile Wimbledon games in the recent times, has been quite active on social media lately.

Sachin Tendulkar’s interest in tennis is well known and he happens to be pretty decent with his skills in this game. The 42-year-old, who has witnessed several high profile Wimbledon games in the recent times, has been quite active on social media lately. The Master Blaster never steps back when it comes to good wishes or encouraging budding talents across any game. His Twitter wall recently showed him wishing several tennis stars. [When Sachin Tendulkar missed the last bus and asked fans for a lift!]

He congratulated Leander Paes, Sania Mirza and Martina Hingis for winning the grand slam and also encouraged 17-year-old Sumit Nagpal, who etched his name in the history books on Sunday by winning the Wimbledon boys’ doubles title with Vietnamese partner Nam Hoang Ly.

Congratulations Sumit Nagpal on the Wimbledon Junior Doubles title. This is just the beginning…. Work hard and follow your dreams

Congratulations @Leander & @mhingis! Kudos to Leander on another Grand Slam title! You have been a terrific role model for youngsters.

Congratulations @MirzaSania & @mhingis. You both were simply fantastic at #Wimbledon2015 ! Many more trophies to follow.. You make us proud. 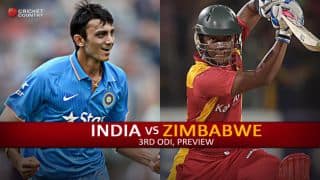