This was Kohli’s first Test as captain at home and he did wonderfully well.

When India’s last eight wickets fell for 39 runs on Day Three, India’s chances looked bleak but in a remarkable turnaround, India who set South Africa a target of 218, managed a 108-run victory. Once again for India it was their spinners who did the job and Ravindra Jadeja in his comeback game picked up eight-wickets. Pick of the tweets: India vs South Africa, 1st Test at Mohali

After having lost the Twenty20 International (T20I) and One-Day International (ODI) series under the leadership of MS Dhoni, India under young captain Virat Kohli pulled off a memorable victory in a dustbowl in Mohali. This was Kohli’s first Test as captain at home and he did wonderfully well. Also Read: Hashim Amla trolled on Twitter after his weird dismissal to Ravindra Jadeja

It will be memorable for him for many reasons as the Test started on the day of his birthday and more importantly he managed to win it against a side that’s ranked one in Test cricket. Twitter congratulated the 27-year-old and his young Team India on Twitter and we present you with some of the best tweets.

Congrats Ind on winning the 1st test.Bowlers did a fantastic job to defend a small targetV.imp knocks from Pujara&vijay#IndvsSA @BCCI

Congratulations India !!!! Never easy to beat SA !!! Now you can all watch #SLvWI

MotM is the icing, what a comeback for Jadeja. Good to see him perform without Dhoni’s guidance. #INDvSA

.@imjadeja is awarded MoM for his excellent all-round performance in the 1st Test: https://t.co/MDERMXDjOO #IndvSA pic.twitter.com/gruwIrCSxa

Only the second Test win for India after getting all out for 201 or less in both inns of the match. First was v WI, Kingston, 2006

1-0 up in the series, Kohli’s first win as Test captain at home #IndvsSA pic.twitter.com/0Xbi11zA31

Whoever is MoM, on this pitch my hero of the match would be Murali Vijay for length of time he batted, technique, resolve & number of runs

If there is anything called justice in this world, Jadeja should be named Man of the Match. #INDvSA

Just like playing seam-swing is an art…playing spin is an art too. Indians bowled and batted spin better. Well played #IndvSA

Only two Indian captains have won their first home Test in three days – MS Dhoni and Virat Kohli – both vs South Africa !!! #INDvSA 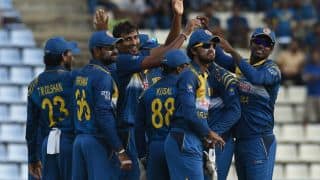