On Tuesday, Sushant Singh Rajput posted a video where he is trying to keep wickets the MS Dhoni-style.

The trailer launch of MS Dhoni’s biopic was an instant hit as the man himself was present during the occasion on August 11. Actor Sushant Singh Rajput, who is essaying the role of the legendary cricketer, has won hearts with his hard work. The glimpses that one saw in the trailer was enough for the fans to pass the verdict that the Neeraj Pandey-directed MS Dhoni: The Untold Story is a must watch.

Less than 45 days remain for the movie release and Sushant is trying his level best to promote the movie. He has been posting videos where he is seen practicing hard and not just that; he is trying to perfect his style and mannerism to match that of Dhoni’s. He has done a brilliant job. ALSO READ: This is how Sushant Singh Rajput practised to play the role of wicketkeeper MS Dhoni

On Tuesday, Sushant posted a video where he is trying to keep wickets the Dhoni-style. Sushant’s cricket credentials have made things slightly easier for him but to ape an unorthodox style like Dhoni’s, you ought to put up a lot of hard work. Twitter has gone insane with Sushant’s recent videos and for a major part of Tuesday, #SushantAsDhoni trended. Here are some best tweets.

Small town boy making it big
Clearly @itsSSR was the only one who could do justice to @msdhoni role #SushantAsDhoni https://t.co/sXFm2rrKXa

Looking forward to this biopic by Sushant Rajput#SushantAsDhoni

After Watching this I am stunned. It’s amazing to say at least. #SushantAsDhoni
Kudos to @itsSSR @msdhoni pic.twitter.com/pBJ99cWGl4

Sushant what an inspiring actor he is just fabulous #SushantAsDhoni @itsSSR as @msdhoni pic.twitter.com/fyG68dUI4r

When someone like @itsSSR tries to prove hardwork pays off, he is certainly a star! @msdhoni #SushantAsDhoni https://t.co/fhDObx74OW

This clip from the movie by @itsSSR gave me goosebumps! #SushantAsDhoni pic.twitter.com/BEdGjjXCCM

Must say @itsSSR nails it, looks very convincing in the role of @msdhoni #SushantAsDhoni pic.twitter.com/pQpUsWB1ej 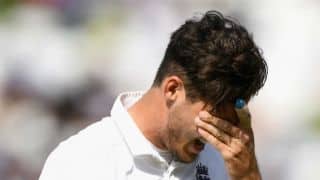 England vs Pakistan: Steven Finn ruled out for at least 1 month