Virat Kohli opens up on comparison with his idol Sachin Tendulkar

Virat Kohli opens up on comparison with his idol Sachin Tendulkar

Inarguably Sachin Tendulkar has been the greatest batsman to emerge from India and Virat Kohli’s phenomenal success over the past few years has drawn comparisons with the Master Blaster.

Inarguably Sachin Tendulkar has been the greatest batsman to emerge from India and Virat Kohli’s phenomenal success over the past few years has drawn comparisons with the Master Blaster. Kohli looks set to overhaul numerous records and it would not be a surprise if he goes on to break the massive records that Tendulkar had set. READ MORE: When Virat Kohli moved Sachin Tendulkar to tears

A fan of Tendulkar and having played alongside in the early part of his career, Kohli called those comparisons invalid. In an interview with India Today, the Royal Challengers Bangalore (RCB) skipper, who recently became the highest run-getter in a single edition of IPL, went on to say, “It is embarrassing to be honest. It is not fair on him (Tendulkar). He can’t be compared to anyone. You are talking about a batsman of a different calibre. I have strengthened my game whereas he was born to achieve all that he has. I have been playing well for two years while he served the nation with grace for 24 years.” ALSO READ: When Virat Kohli bowed to Sachin Tendulkar after registering his match-winning fifty against Pakistan at Kolkata

He further added, “He is two levels above anyone else in this generation of batsmen. I am individually inspired by him though I would like to create my own path.”

Has he peaked yet

Every batsman goes through a phase when he is unconquerable and many think that Kohli is probably going through that at the moment. However Kohli likes to keep it simple. He is averaging over 98 in T20 cricket this year, having won the Player of the Tournament in ICC World T20 2016 and now also dons the prestigious Orange Cap in IPL.

“I don’t know if I have reached my peak yet. It just feels that I have just started in the last couple of months. Coaches including in IPL ask me regularly whether I have hit peak or not. All I can say is that I have been hitting the ball better than I have ever but I know this phase can’t be taken for granted.

I would like to enjoy this phase rather than think about anything else. I have never been this calm in my head. I am aiming for improvement not just as a cricketer but also as a person,” Kohli said.

Kohli emphasises that fitness has helped him go that extra mile and credits Shankar Basu for the same. While he is a dasher, always giving over cent percent on the field, there is another side to the 27-year-old. INFOGRAPHIC: Virat Kohli’s 752 and counting, the most in a single edition of IPL

Speaking about his aim in life, Kohli said, “My only aim in life is to grow as a person. You are a cricket professional but the other aspects of life are equally important. I want to be a monk living in a civil world. On the field by the time I finish, I hope I have made a difference to the sport and Indian cricket.” 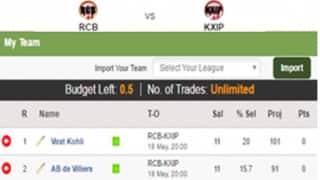