Virat Kohli slams media; says 'his comments are being used as masala for news'

Virat Kohli slams media; says 'his comments are being used as masala for news'

Star Indian batsman — Virat Kohli, who was in Hyderabad recently to launch a store of his brand ‘Wrogn’, took on media quite sarcastically.

Star cricketer Virat Kohli has not just been fans’ favourite, but also media’s darling. Such is the extent of media’s obsession with the dashing batsman that whatever the cricketer says or does become news. Not just his words or actions, at times his silence and his personal life too become a fodder for the news-hungry media.

The batsman, who was in Hyderabad recently to launch a store of his brand ‘Wrogn’, took on media quite sarcastically. The context was Salman Khan’s appointment as goodwill ambassador for the Indian contingent at Rio Olympics, and when Kohli’s reaction was sought on the matter, he said: “I am not in a position to comment about it. It really doesn’t matter what I feel about it. So, there is no point putting it out there.”

The 28-year-old further went on to say, “The decision has to be made by the concerned people and I have said this before as well. Lot of people have voiced their opinions and for me I can’t make comment because I am not making that decision. It’s not my place to answer that because whatever I say honestly it’s going to be MASALA for news. It’s not going to make any difference. I am being very honest. My opinion will not change the decision for anyone in any sort of association or organisation and I am in no position to make a comment on that.”

Kohli is currently leading the Royal Challengers Bangalore (RCB) in the ninth season of Indian Premier League (IPL). His team, which possesses some of the best in the business, is at the penultimate spot at the moment. Personally though, Kohli has been in a superior form; perhaps the form of his life, at least in T20s. 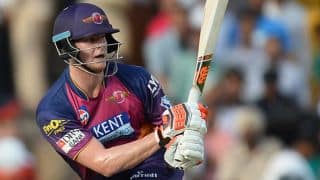