Parnell made a lot of headlines in 2011 when he converted to Islam and has also changed his name to Waleed.

South African all-rounder Wayne Parnell got hitched with fashion blogger Aisha Baker on Saturday and are all set to commence their new innings together. Parnell won’t be able to spend a lot of time with Aisha as he is all set to begin his course to West Indies to play for the South Africa. His marriage was attended by 44 guests at the Zeenatul Islam Mosque in District Six, Cape Town. READ MORE: Shakib-Al-Hasan wishes to erase the dreadful World T20 memory against India

Parnell made a lot of headlines in 2011 when he converted to Islam and has also changed his name to Waleed. He was quoted in a report from arynews.tv saying, “I converted to Islam in January 2011, after a period of personal study and reflection and it is a faith that I have always been interested in.” READ MORE: Chris Gayle opens up on his ‘big bat’, women, sex, cooking and changing nappies

Parnell urged the issue to be treated with respect and said, “My faith choice is a matter which I would like to keep private.”

Parnell also took to his Twitter handle and expressed his glee, he tweeted, “What’s better in life than telling your parents how much you  and appreciate them. In the presence of family, friends and The Almighty.” 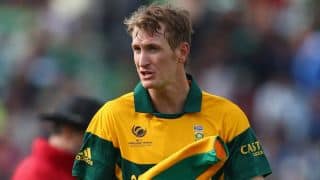