Sri Lankan southpaw Kumar Sangakkara has been an elegant batsman and a prolific run-maker throughout his career.

Sri Lankan southpaw Kumar Sangakkara has been an elegant batsman and a prolific run-maker throughout his career. He plays conventional cricket and has been equally effective when it comes to unorthodox one. Sangakkara, after calling it a day from international cricket, has been seen playing English County cricket and is now serving the Surrey side for the Natwest T20 Blast. READ MORE: Andrew Symonds: 13 facts about the controversial Australian all-rounder.

In a recent group encounter between Surrey and Hampshire, Sangakkara played exceptionally well and scored brisk runs with the bat. He fired a scintillating 72 from just 35 deliveries and also played ‘dil-scoop’ which is a patent stroke by his former national teammate Tillakaratne Dilshan. Sangakkara executed this particular stroke to perfection and earned a priceless boundary. This made Surrey cricket’s official Twitter handle tweet about the incident as they posted a video of the stroke and wrote, “Behave yourself @KumarSanga2.” READ MORE: Virat Kohli expresses his support to Germany for Euro 2016.

Sangakkara will be a key player for the side as he’s been in good form and has scored runs in almost every outing. One can expect a lot more improvisations in the matches to come. 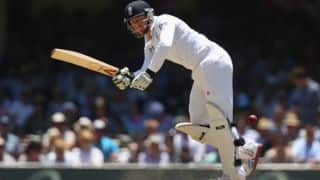