In 2001, Mortaza was on the threshold of making his international debut. Just prior to it, he had come to the tour of India with the Bangladesh A team.

Bangladesh cricket has been on the rise in last couple of years and a lot of credit for the same goes to their maverick skipper in limited-overs formats Mashrafe Mortaza. It was under him that the team beat much stronger oppositions in Pakistan, India and South Africa at home. Also it was under his leadership that the Tigers roared into the World Cup quarter-finals for the first time in 2015, going past a better-ranked England side. It is perhaps due to the same self-belief and self-confidence that he instilled amongst the players that they went on to beat England for the first time in Tests recently at home.

The same cricketer recently completed 15 years in international cricket and on this occasion, we thought of sharing an old anecdote related to Mortaza with you all. For the same, we need to go back to 2001, when Mortaza was on the threshold of making his international debut. Just prior to it, he had come to the tour of India with the Bangladesh A team. The Bangladesh team, which was scheduled to play the Mumbai Cricket XI, the Maharashtra Cricket XI and the Cricket Club of India (CCI) President s XI on the tour, had some really talented, future players in the squad.

The incident, narrated by that team s skipper and former Bangladesh captain Khaled Mahmud, recently came into notice when an ESPNCricinfo article shared it. It quotes him saying: We were having dinner on the balcony of the CCI in Mumbai when the club’s president, Raj Singh Dungarpur, walked up to us and asked who the captain of the team was. I stood up and shook his hand. He said, “Please play well tomorrow. Don’t lose too badly.

Mashrafe was just a kid back then. He asked me what was being said, and I told him. I think Mr Dungarpur’s words did us a huge favour that day. Mashrafe bowled really fast in that game, and took three wickets. I have seen Taskin [Ahmed] bowl, but in those days, Mashrafe was really quick. That day, Mashrafe showed us how good he would be for Bangladesh, Mahmud said.

The match Mahmud talked about in the article happened at the Brabourne Stadium in Mumbai on October 17, 2001. Batting first, the CCI were bowled out for a paltry 124 in the 50-over match. The dismal performance came after the club president Dungarpur had made mockery of the visitors on the eve of the match. Mortaza, who was fired up by Dungarpur s words, had the figures of 7-2-15-3. All the three wickets he took were clean bowled. Bangladesh A chased down the total quite comfortably to register a six-wicket win.

As if this was not enough, the visitors trumped the CCI President s XI once again in two days time. Bangladesh managed 228 batting first on that occasion and bundled out the hosts for 157 to complete a 71-run win. Mortaza was once again the pick of the bowlers with 2 wickets to his name. After teaching CCI and Dungarpur a lesson, the Bangladesh team returned back home with pride and Mortaza made his international debut within a month in the Test series against Zimbabwe. India vs England 2016: I wouldn't play James Anderson in India to be honest, says Sourav Ganguly 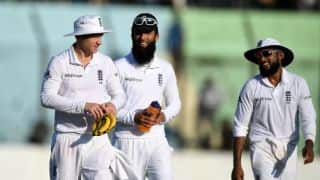