An umpiring decisions during the game between India and Sri Lanka which went against Lankan batsman Thisara Perera, turned off the Sri Lankan fans.

India and Sri Lanka clash in the ongoing Asia Cup T20 2016 turned out to be a rather easy outing for MS Dhoni’s men, who won it comprehensively and sealed a berth in the final. However, one of the decisions during the game, which went against Sri Lankan batsman Thisara Perera, turned off the Sri Lankan fans. Video: Was Thisara Perera out?

The incident involved a stumping appeal by Dhoni which was almost instantly accepted by the leg-umpire. The batsman in question, Perera had made his ground but the umpire did not bother to seek TV umpire’s opinion and ruled him out. The decision came at a critical time as Perera was in the middle of a brief cameo and could have added more vital runs had not been given out. One fan in particular took it rather seriously and questioned Ravichandran Ashwin on ICC’s bias towards India on Twitter. Ashwin was spontaneous in his reply:

@ashwinravi99 its been given out, whr is @ICC now? Stil in dubai? Or at mirpur?? pic.twitter.com/3LmcdvlMlZ

Undeterred by the spinner’s reply, the fan was persistent and further questioned Dhoni and his men’s take on fair play. On this, Ashwin came with a witty reply, as his tweet read:

@ashwinravi99 bt still, u knw it was not out.. U could hav call @thisara back.. U knw it is a gentleman’s game..

@nibrazramzan fortunate that I have tunnel vision,but no 3D vision.

Sri Lanka bowed out of the tournament along with Pakistan in the group stages. Both teams will meet on Friday in the last league game which is of no relevance. India meanwhile will take on hosts Bangladesh in the final on Sunday. 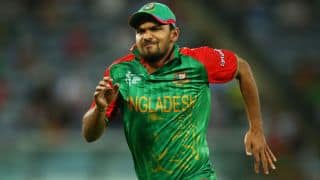