BCCI's attempt to take cricket to the American on-shores was not that fruitful. Sunil Gavaskar needs no introduction. A great batsmen, he is a recognisable face in the cricketing world, thanks to his stature and his media commitments.

The Board of Control for Cricket in India’s (BCCI) attempt to take cricket to the American on-shores was not that fruitful. It started well with India losing a thriller to West Indies on Saturday by a run but the following day, an unneeded technical delay meant an abandonment of the second match.

Sunil Gavaskar needs no introduction. One of the greatest opening batsmen to grace the sport is a recognisable face in the cricketing world, thanks to his stature and his media commitments. ALSO READ: When an angry captain Sunil Gavaskar almost conceded the Melbourne Test

The legend was at the receiving end of a security detail on Sunday and was made to wait till Indian team bus entered the stadium. The person assigned to take care of the Little Master’s travel and logistics was miffed and a cricket journalist gave the entire account through his tweets.

Standing outside gate being denied entry again as India team is here. I feel better today though because they’re denying Sunny Gavaskar too.

SMG’s minder was pissed. “Do you know who he is?! He needs to be inside.”
Security: “I don’t care who the hell he is, he ain’t gettin in!”

Gavaskar was cool about it. He passed the time taking selfies with fans outside the gate until India team bus left and we were allowed in.

Gavaskar engaged himself clicking selfies with the fans. We all know how strict the security in the US is and surely, the ‘pata hai mera baap kaun hai’ does not work in the country. However, the US will need to do a lot of cricket study too and also about India. They will then stop denying entry to Gavaskar and not detain Shah Rukh Khan at the airport. 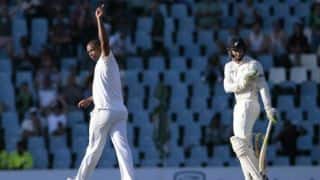