When the entire Indian team was made to run on the road!

When the entire Indian team was made to run on the road!

Ahead of World Cup 1996, India's team management came up with the idea of the entire team running to the M Chinnaswamy Stadium from the hotel every morning. The rule, however, did not impress the members of the team.

The Indian team was a bunch of confident players before the beginning of World Cup 1996. Till then, no team had ever won the World Cup on their home soil, and there was an air of confidence within the Indian side that they had a great chance of scripting history in that edition. It had a good mix of experience and youth and the home advantage made them a serious contender. ALSO READ: When Sachin Tendulkar’s bat weight was reduced to 100-300 gms by his bat-maker.

The team led by Mohammad Azharuddin gathered in Bangalore (now Bengaluru) in January 1996 for the preparatory camp ahead of the start of their campaign. Though the morale of the team was upbeat, a strange rule at the camp left the team in a spot of bother. The team management came up with the idea of the entire team running to the M Chinnaswamy Stadium from the hotel every morning, with the security cars trailing behind. The rule, however, did not impress the members of the team. ALSO READ: Video: Venkatesh Prasad gives Aamir Sohail a dose of his own medicine.

Legendary batsman Sachin Tendulkar, who was tournament’s leading run scorer with 523 runs from seven games, had mentioned about this particular incident in his autobiography ‘Sachin Tendulkar: Playing it my way’. He wrote, “I still don’t understand the logic behind this bright idea or why somebody came up with it in the first place. None of us were used to road running and injuries were bound to happen. I ended up with a sore shin on the very first day, while a number of other guys had problem with their back and hamstrings.”

Tendulkar further mentioned that a joke started doing the rounds within the team back then that whether the team was to field on roads or cricket fields? Some players then took matter to their hands and advised the management to get the distance between the hotel and the stadium calculated and then ask the team to cover the same distance by running inside the stadium. “The management listened to us and road running was quickly abandoned”, wrote Tendulkar in the book. It is then that the team’s preparations came back on track and it travelled till the semi-final stage at the World Cup. 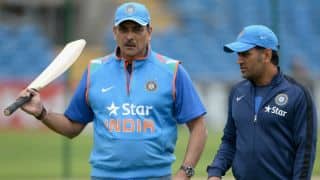