In the mid-innings show during the 4th ODI between IND and AUS, presenter Jatin Sapru asked Laxman and Dean Jones to compare cricketers with animals.

Over the years, the greatness of Sachin Tendulkar has been described with numerous adjectives but we are not sure if somebody ever called him ‘an elephant.’ There is always a first time and VVS Laxman nailed it with his description.

In the mid-innings show during the fourth ODI between India and Australia at Canberra, presenter Jatin Sapru asked Laxman and Dean Jones to compare cricketers with animals. Prior to this the commentators were discussing Wasim Akram’s National Zoo visit in the Australian capital. Laxman and Jones both came with their reasoning; let’s start with our very very special man.

Tiger: Sourav Ganguly. It is not the first time someone has called him that. A fearless leader, elegant player and hailing from the land of Bengal, which is famous for its tigers, it fits him well.

Kangaroo: Virender Sehwag. Don’t go by the physique. Laxman explains that Sehwag is someone who never ever takes a backward step.

Fox: A wily spinner is often complemented with this title and Harbhajan Singh was surely one. Calling him cunning and intelligent, Harbhajan is Laxman’s pick for ‘fox’ here.

Elephant: Sachin Tendulkar, why? No cricketer could match the massive presence of Tendulkar, who always seemed to be under control. Jones was quick to say that when he meets Tendulkar the next time, he will greet him, “Hello, Elephant!”

Eagle: Glenn Maxwell, for his sharpness and swiftness.

Snake: Rahul Dravid. No, Dravid was not venomous but had the property of silent-killing. Laxman says that Dravid never gave an impression of accumulating runs.

Cheetah: Virat Kohli, for his sharpness, strength and speed.

Elephant: Merv Hughes. Quite right in terms of physique and presence, Jones also says that the fast bowler possesses a great memory.

What do you think of the picks? 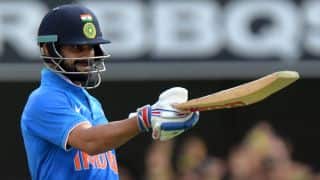