It would be remembered as the year which witnessed Gayle's215, first double ton in an World Cup, first ever day-night Test and Sangakkara becoming the first batsman to hit four consecutive ODI hundreds.

With 2015 having ended, let’s delve into some of the remarkable events that occurred for the first time in the gentleman’s game. The year was special, with lots of action and multitude of records being broken. It would be remembered as the year which witnessed Chris Gayle’s stupendous 215, first double ton in an ICC Cricket World Cup, first ever day-night Test and Kumar Sangakkara becoming the first batsman to hit four consecutive ODI hundreds. Bhaskar Narayan takes you on a fact- filled flashback ride and picks out some of the notable firsts of the year. Sit back, relax and rewind your mind to relive the firsts of 2015.

1. AB de Villiers smashes first ODI century under 35 balls; also becomes the first non-Indian to hit 16 sixes in an ODI innings: De Villiers became the first batsman in the history of the sport to hit a century inside 35 deliveries when he blasted the fastest ODI hundred in 31 balls at New Wanderers on January 18, 2015. He went on to score 149 in 44 balls at a jaw-dropping strike rate of 338.6. In the process he also eclipsed Sanath Jayasuriya’s record of the fastest ODI fifty which he had scored against Pakistan in 1996. De Villiers got to his half century in 16 balls, bettering Jayasuriya’s record by one delivery. Mr 360 proved why he was probably the most fascinating thing to have happened to cricket in the last decade with his amazing strokeplay. He played the pull, scoop and the lofted drive. Read more: 2015 Yearenders: Cricketers who bid adieu to the sport this year

He also became the first non-Indian to hit 16 sixes in an innings. Rohit Sharma had also struck 16 sixes en route his knock of 209 against Australia at Bangalore in November, 2013.

[Note: Around a month after de Villiers’ blitzkrieg, Chris Gayle too equalled him and Rohit with 16 shots which dispatched the ball over the ropes in his 215-run knock.]

2. South Africa’s first 400-plus score against West indies, also the first match which witnessed three individual centuries: In the same match in which de Villiers smashed the fastest century, three batsmen struck centuries in the same innings for the first time. Openers Rilee Rossouw and Hashim Amla struck hundreds before de Villiers started the carnage. It is the first and only international match in history in which every batsman who faced at least a ball went on to score a century.

[Note: David Miller did not face a single delivery after the dismissal of de Villiers in the final over as strike had rotated].

[Note: South Africans again repeated the feat of three batsmen scoring a century in an ODI — against India in the fifth ODI of the recently concluded Gandhi-Mandela series. Centuries by Quinton de Kock, Faf du Plessis and de Villiers helped them post 438.]

[Note: Overall, South Africa’s 439 is second only to Sri Lanka’s 443 against Netherlands on July 4, 2006. The Fastest South African centurion in limited-overs after de Villiers is Mark Boucher with his 44-ball ton against Zimbabwe in 2006.]

3. Chris Gayle‘s ‘firsts’ connected to his double hundred in ODI cricket: On February 24, in a Pool B match of the World Cup, against Zimbabwe at Manuka Oval, Gayle smashed a double-hundred off just 138 deliveries. This is the fastest ODI double-hundred till date, bettering Virender Sehwag’s record by 2 balls. Gayle went on to score 215 in 147 balls. West Indies posted 372 in their allotted 50 overs. Zimbabwe had to chase 363 in 48 overs as per Duckworth-Lewis method but they got bowled out for 289 in 44.3 overs. West Indies took a 73-run victory. Read more: Yearenders 2015: 10 memorable moments in Twenty20 cricket

Things which happened for the first time:

2. He also became the first and only left-handed batter (till now) to score an ODI double century.

3. He also became the first to crack a double hundred in a World Cup.

[Note: In the fourth quarter-final of the same World Cup, Martin Guptill carted an unbeaten 237 off 163 balls against West Indies at Westpac Stadium, Wellington. Guptill became the first batsman to score a limited-overs double century in New Zealand, and the second batsman after Gayle to hit a double-century in a World Cup match.]

4. Kumar Sangakkara becomes first batsman to hit four consecutive ODI centuries: During the World Cup, Sangakkara became the first batsman to smash four back to back hundreds. Sangakkara struck an unbeaten 105 (in 76), 117 (86), 104 (107) and 124 (95) against Bangladesh, England, Australia and Scotland respectively. This was the first time it happened in ODI history. He bettered Zaheer Abbas, Saeed Anwar, Herschelle Gibbs, de Villiers, de Kock and Ross Taylor, all of whom have three consecutive ODI centuries each.

6. Afghanistan participated in its first-ever World Cup, and won their first World Cup match: Afghanistan played the World Cup for the first time, and also registered their first win in the tournament. They achieved this against Scotland. The match went down to the wire as Afghanistan chased down Scotland’s 210 with the help of Samiullah Shenwari’s 147-ball 96.

11. First Day-Night Test: Something that had never happened in Test cricket’s 138-year old history but was often contemplated on finally gained concrete shape in 2015. On November 27, 2015, the first day-night Test was played with a pink ball at the Adelaide Oval. It was the third Test of New Zealand’s tour to Australia 2015; the hosts won by 3 wickets after a tight fourth-innings chase. 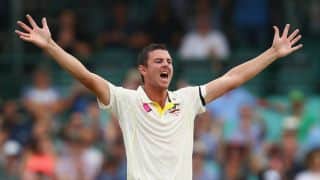