Yuzvendra Chahal made his debut in the first One-Day International (ODI) of the thee-match series against Zimbabwe on Saturday and played under skipper MS Dhoni for the first time.

Indian leg-spinner Yuzvendra Chahal successfully made it to the national side riding on some magnificent performances for Royal Challengers Bangalore (RCB) in the Indian Premier League (IPL). He signed off the tournament as the second highest wicket-taker and did a commendable job in a rather weak RCB’s bowling attack. READ MORE: MS Dhoni, Sourav Ganguly and other sportspersons help raise 14 Lakh for charity

Chahal made his debut in the first One-Day International (ODI) of the thee-match series against Zimbabwe on Saturday and played under skipper MS Dhoni for the first time. The pressure was immense on the young wily spinner and wasn’t aware of Dhoni’s behaviour and had a fear in the back of his head. But to his surprise,  Dhoni turned out to be friendly and made the job easy for the debutant. Chahal played well in his debut and was economical with a wicket to his name. READ MORE: India tour of Zimbabwe 2nd ODI, Pick of the tweets: Zimbabwe vs India at Harare

Talking to Indian Express, Chahal said, ” Before I met him (Dhoni), there was a fear about how he will be. But he’s really simple. You can ask him anything. Even on the ground I never felt like he was a captain. I felt like dealing with a friend.”

Chahal also spoke about how being an expert in chess helped him in shaping his strategy on the cricket field. He said, “It’s been 13 years since I quit chess. But yes I think this intuition has developed as a result of those experiences. I bowl at the stumps. I get an intuition that the batsman’s going to do something. If you bowl four-five dot-balls, then pressure is on him. At that point, you have time to decide whether to bowl a googly or outside off-stump. My mind is on that, and always trying to guess what the batsman’s trying to do and it helps me a lot. When you play chess, patience is vital. Many times you don’t get wickets and you concede runs, you need to remain patient. So it’s about being calm, and I’m mentally strong and it makes a big difference.” 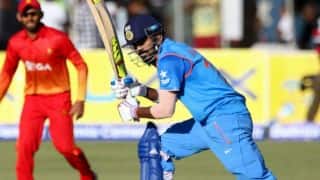