Services swing fast bowler Diwesh Pathania, like any other player in the domestic circuit has goals of playing in the lucrative Indian Premier League and representing the country. Pathania, known to swing the ball both ways, had finished as the fourth-highest wicket-taker in Ranji Trophy 2019-20 season. The 31-year old from Pathankot had bagged 50 wickets in nine matches at an impressive average of 15.82.

Pathania took four five-wicket hauls as he impressed with his ability to bowl a consistent line and length. His best performance of 8-63 came against Tripura (which included a fifer in the first innings). Overall, the fast bowler has snared 183 wickets in 42 first-class matches at a splendid average of 23.07.

Pathania, who works in Army, in a free-wheeling chat with CricketCountry spoke about his goals, fitness, domestic circuit, Covid-19 and much more.

Here are the Excerpts of the Interview

What are the facilities you get while playing for Services in the domestic circuit?

How has life changed for domestic players during Covid-19 as there is no action?

It has changed a lot. As there is no action, it is not easy to keep ourselves in good momentum. But we try to keep ourselves healthy by hitting the gym. I have worked hard on my fitness in the last year and I am also trying to improve my skills.

Recently a selector made a comment that Jaydev Unadkat is not selected because of his age. Does this demotivate you?

Yes, it does sometimes. But the selectors keep changing and with them, the statements also change. One selector can say one thing and the other can have a different opinion on the same. An upcoming selector can say that we will consider performances and not look at the age. So, the selection is something that is beyond my control and I can put in good performances to get selected. It is well said that age is just a number and it shouldn’t be considered for national selection.

You can swing the ball both ways, do you want to add extra pace to your repertoire?

I bowl at around 130-135 kmph. However, I feel I will lose control if I try to add an extra couple of yards. So I try to focus on my control and swinging the ball is my forte and I try to stick to it.

Services have never won a Ranji Trophy title, where do you think they lack?

I think we have the talent and skills to go a long way. But our players hardly get the recognition they should get at the top level. We have been consistent performers and you will always see a Services batsman in the top 10 highest run-getters in Ranji Trophy and also a bowler in the top 10 highest wicket-takers. But we don’t have a lot of stars or big names in our team.

I feel we don’t get the exposure we should get to play with and against the big players, from whom we can learn a lot. I have been named as the all-rounder of the domestic season on a couple of occasions but haven’t got the big break.

You finished as the fourth-highest wicket-taker in the previous season of Ranji Trophy, how satisfying was that?

Ending with 50 wickets in Ranji Trophy is no small feat. I feel proud that I have achieved something big in the domestic circuit. I always try to give my best and keep improving my game to reach new heights.

Which IPL team would you like to play for and why?

Any team right now will be great (chuckles). Personally, I like Royal Challengers Bangalore and I would like to play for them in future.

James Anderson and Stuart Broad. They have been swinging the red ball consistently and have been delivering for England despite the age, not on their side. I always think if they can do it, I can also perform consistently.

Who do you think will be favourites in the WTC final?

I think it will be 50-50. But New Zealand might hold a slight advantage as they will be playing two Test matches in England before the big game. On the other hand, India had played a Test match back in March, so lack of match practice could be an issue for them. 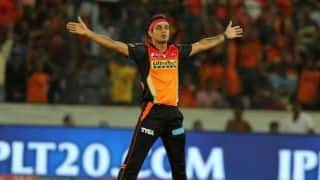