The ICC on Wednesday reprimanded England wicketkeeper Matt Prior for breaching the governing body's code of conduct during the second cricket Test against Sri Lanka at Lord's. 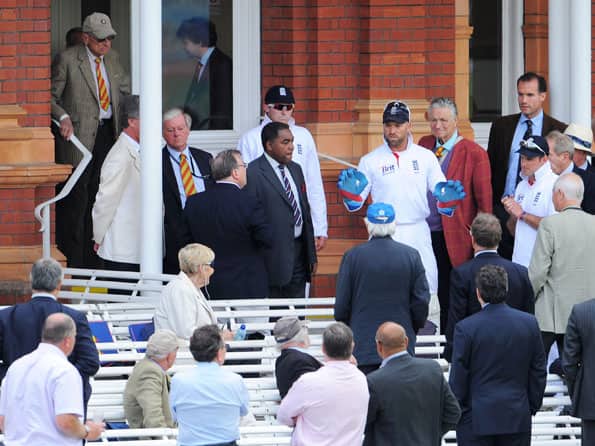 The ICC on Wednesday reprimanded England wicketkeeper Matt Prior for breaching the governing body’s code of conduct during the second cricket Test against Sri Lanka at Lord’s.

Prior smashed a window on being run out on the final day of the Lords’s Test due to which a female spectator suffered a minor cut to her ankle after the shattered glass fell into the seating area below England’s dressing room.

Prior accepted the Level 1 charge and the proposed sanction from match referee Javagal Srinath.

Prior was found to have breached clause 2.1.2 of the code which relates to “abuse of cricket equipment or clothing, ground equipment or fixtures and fittings during an international match”, the ICC said in a statement.

“Matt knows that his action was in breach of the code and he should be more careful in future. That said, it was clear that the damage he caused was purely accidental and without malice. It’s also noted that he apologised to the ground authority for the incident,” said Srinath.

As Prior accepted the offence and the proposed sanction, there was no need to convene a formal hearing, the statement read.

Level 1 offences carry penalties ranging from an official reprimand to 50 per cent of a player’s match fee.

After the incident, Prior, accompanied by captain Andrew Strauss, apologised in person after the match ended in a draw.

“It was a genuine accident. I was out on the balcony, but a lot of the guys in there saw it, and he wasn’t meaning to throw anything at the window,” Strauss had said earlier.

Chance for India to topple Oz in ODI rankings