The Costa Rica coach thinks their plan of comeback against Uruguay worked.

Shrugging off a one-goal deficit from the first half, Costa Rica rallied to score three in the second to upset a highly rated Uruguay 3-1 in the 2014 Brazil World Group D opener in Arena Castelao. “Changing of the pace was very important for us. We must recognise that Uruguay has very strong players, but some are slow, said Jorge Luis Pinto, coach of Costa Rica, at the post match media conference, reports Xinhua.

“We changed the rhythm of the match in the second half and we found their weakness,” Pinto said. “It was a tough match for us. We played well in the first half but we did not expect such result,” said Uruaguay’s coach Oscar Tabarez.

“Costa Rica is a very strong team and they scored great goals. We gave them too much space for attacking in the second half and they controlled the second half.” Uruguay’s star striker Luis Suarez, who is recovering from a knee surgery, was left on bench as Tabarez did not want to take any risk. PSG forward Edinson Cavani paired up with veteran Diego Forlan, the winner of Golden Ball award in 2010 South Africa World Cup, to lead the attacking line for the Uruguayans under a 4-4-2 formation.

Centre back Diego Lugano, also captain of Uruguay, was brought down in the box 22 minutes into the match when he was trying to meet a freekick from the left flank. Cavani converted the penalty with a powerful shot into the low right corner. Uruguay also had a goal waved away in the 14th minute because defender Diego Godin was found off-side by the assistant referee.

The Ticos paid much attention on their defence as they fielded five defenders and only left Arsenal forward Joel Campbell upfront. Their best opportunity in the first half came in the 30th minute when a deflected shot from Giancarlo Gonzalez hit the side of the net. Costa Rica posed more threat in the second half. Defender Oscar Duarte’s close-range hammer from the far post was blocked by Urugary keeper Fernando Muslera five minutes after the break. But the Ticos did not wait for long to level the score.

The 21-year-old Campbell, who was on loan to Greek giants Olympiacos last season, chested down a cross deep from the right and slotted home the equaliser with his left foot in the 53rd minute. The Uruguayans were still coping with the astonishment for conceding the goal when Costa Rica scored again after three minutes. Duarte, again, received a freekick pass in the far post and only this time his sharp-angled diving header managed to beat Muslera and awarded the Ticos with a one-goal lead.

Uruguay replaced out-of-form Forlan and tried to enhance their attack while a defensive minded Costa Rican continued to threaten the opponents with set pieces and counter attacks. In the 84th minute, Campbell set up a fine through pass to second half substitute Marco Urena. The 24-year-old striker from Russian side FC Kuban Krasnodar rounded off the scoring at 3-1 with his right foot effort only one minute after being brought onto the pitch.

However, Uruguay’s misery did not end there. During the injury time of the match, their defender Maximiliano Pereira received a red card for deliberately kicking Campbell’s leg and will miss the next match against England. Campbell was named man of the match for one goal and one assist. And Pinto praised Campbell’s shining performance in the match, stressing the striker’s speed and talent were the key elements to the team’s victory. “It was important for Campbell to be able to change his speed in confined space, which gave us the advantage,” he added. 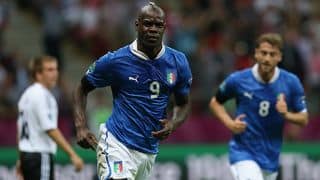