Yepes said there is very little to chose between the two sides.

Colombia and Greece clash in Group C plagued by fears over where their FIFA World Cup 2014 goals will come from.The South Americans were rocked when talismanic striker Radamel Falcao lost his battle to be fit for the finals after suffering a serious knee injury playing for French club Monaco in January.

Immediately, Jose Pekerman’s team lost a man who has scored 20 goals in 51 internationals since his debut in 2007. The 28-year-old was his country’s top scorer in the qualifying campaign as his nine goals helped Colombia make the finals for the first time since 1998. In the absence of Falcao, Teofilo Gutierrez, who plays his club football at River Plate in Argentina, is expected to carry his team’s goal-scoring burden starting against the Greeks.

Gutierrez, 29, has scored 12 goals in 30 internationals and will be supported by Victor Ibardo, the Cagliari winger, or Porto’s Jackson Martinez. Colombia, whose best World Cup run was a last-16 appearance in 1990, have 18 players who feature in the European leagues. One of those is Falcao’s Monaco teammate James Rodriguez, a key figure in midfield who is a genuine threat from free-kicks.

However, his appetite for the hard yards of defence has often been called into question. Martinez believes the 2014 Colombia team has more talent than the 1994 squad who went to the United States finals as one of the favourites but flopped in the first round.

“I think that it’s one of the most evenly-matched groups at this World Cup,” said the Porto player. “Ivory Coast have very experienced players with a lot of quality, Japan are always at the World Cup and cover every blade of grass, and Greece are tactically very strong.

“When you’re at a World Cup, the first thing you say to yourself should be, ‘We don’t know how far we’re going to go, but we do know how far we want to go’.” Colombia skipper Mario Yepes, 38, believes there will be little to choose between his side and Greece.

“In football, there are few mysteries. We have an overview of what Greece are like and I would think they have a clear idea of Colombia,” said Atalanta defender Yepes, who sees possession of the ball as key.

“It’ll be a very complicated game, as will all the first phase matches.”

Greece, the shock European champions in 2004, were knocked out in the first round in South Africa in 2010.

They can call on first-choice striker Kostas Mitroglou who has plenty to prove after his ?12 million (15m euros, 20m) move from Olympiakos to Fulham turned into a nightmare.

The player called ‘Pistolero’ by his adoring Greek fans made just one start for the London club, who were relegated from the Premier League while he spent most of his time fighting a knee injury.

The 26-year-old has eight international goals but he has a knack of scoring at the right time.

He scored twice in Greece’s 3-1 home win against Romania in the first leg of their World Cup play-off and found the target again in the return leg in Bucharest.

That ended in a 1-1 draw as Greece made it to Brazil 4-2 on aggregate. Mitroglou made his name at Olympiakos, once scoring 15 goals in 17 matches, including a Champions League hat-trick.

Greece will be skippered on Saturday by another Fulham player, Georgios Karagounis, the 36-year-old who has 135 caps.

“Our main goal is to make it to the knockout rounds, which is something we have never done before,” said Karagounis of a Group C which also includes Japan and Ivory Coast.

“In order to do this, we have to take each game as it comes. The most important game for us is against Colombia. This is our first game and they are a dangerous team.” 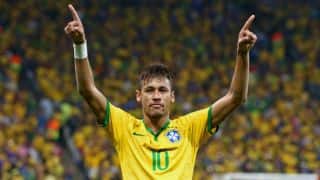