France's best attempt of the first half came from Pogba.

A Paul Pogba header in the 79th minute and a Joseph Yobo own goal gave France a 2-0 victory over Nigeria and earned the European side a berth in the FIFA World Cup 2014 quarterfinals here Monday.

The game looked headed for extra time before Pogba broke the deadlock in the 79th minute at the Mane Garrincha National Stadium, reports Xinhua.

France will now play either Germany or Algeria at Rio de Janeiro’s Maracana stadium July 4, with a place in the semifinals at stake.

The former France captain is unbeaten in 10 World Cup matches as both a player and manager.

Peter Odemwingie will have rued his missed opportunity in the fifth minute when he failed to connect with an attempted volley after a cross from the right found him free in the penalty area.

Odemwingie was again involved shortly after, providing a sumptuous delivery from a set piece to John Obi Mikel at the far post. But the Chelsea midfielder’s tame header did not trouble France goalkeeper Hugo Lloris.

Les Blues began to find their rhythm after the quarter hour and Olivier Giroud shot over the bar after a smart turn at the top of the penalty box.

France’s best attempt of the first half came from Pogba. The Juventus midfielder laid the ball off for Mathieu Valbuena, whose cross from the right again found the former Manchester United man.

But his fierce first-time shot drew a sharp reflex save from Vincent Enyeama.

Nigeria almost made France pay for their profligacy on the stroke of halftime when Emmanuel Emenike wandered unmarked to the edge of the area before unleashing a powerful shot that Lloris palmed clear.

Nigeria began the second half as they had the first: with greater possession and menace around the final third.

Efe Ambrose was particularly threatening on the right flank. The Celtic defender repeatedly bombed forward and provided a series of crosses upon which Nigeria’s forwards failed to capitalize.

His neat one-two with Karim Benzema sent the Real Madrid forward clear on goal but his chipped effort was cleared off the line by Victor Moses.

Griezmann again exposed Nigeria’s defence when his cross to the edge of the six-yard box forced a lunging clearance from Enyeama.

The Super Eagles were under siege and France were denied once more as Benzema’s header from a Valbuena free-kick was finger-tipped over the bar by the hitherto impressive Enyeama.

But despite his heroics, the Nigeria goalkeeper was largely to blame for France’s first goal.

His bungled clearance from a Valbuena corner allowed Pogba to head the ball into an unguarded net.

Griezmann nearly doubled France’s lead but his powerful shot after a blazing run into the area was spectacularly parried away by Enyeama.

The result was then put beyond doubt when Yobo deflected Valbuena’s delivery into his own net. 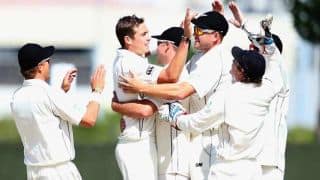