The FIFA Fair Play Trophy was won by Colombia.

Argentina lost 0-1 in extra time to Germany in the final at the Marcana stadium here Sunday. Messi failed to get on the scorsheet, but the voters still thought he was the best player in the tournament. The 27-year-old appeared in all seven of the team’s matches, scoring four goals and chipping in with an assist.

Other players in the running for the award were Arjen Robben (Netherlands), Neymar (Brazil), Rodriguez (Colombia) and Thomas Mueller (Germany). Meanwhile, thanks to his tally of six goals Rodriguez took home the Golden Boot, while last year’s winner Muller, who scored five goals, won the Silver Boot.

German goalkeeper Manuel Neuer, who was beaten just four times in the tournament and kept clean sheets in the quarterfinal and the final, won the Golden Glove award. The 27-year-old Bayern Munich keeper beat off competition from Argentina’s Sergio Romero and Costa Rica star Keylor Navas. 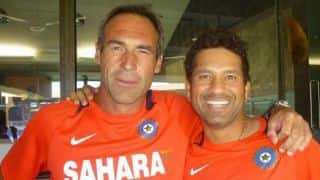