The Iatlian defender feels Uruguay will miss him in the World Cup.

Italian defender Giorgio Chiellini said that FIFA’s four-month ban and the nine-game suspension on Luis Suarez was harsh. Chiellini on his site wrote on Friday that he has “no feelings of joy, revenge or anger against Suarez”.

“Now inside me there’s no feelings of joy, revenge or anger against Suarez for an incident that happened on the pitch and that’s done. There only remain the anger and the disappointment about the match,” said the Juventus defender. Chiellini said that he was concerned about Luis, who had bit him during Uruguay’s 1-0 win over Italy in Group D match of the FIFA World Cup 2014.

“At the moment my only thought is for Luis and his family, because they will face a very difficult period. I have always considered unequivocal the disciplinary interventions by the competent bodies, but at the same time I believe that the proposed formula is excessive. I sincerely hope that he will be allowed, at least, to stay close to his team mates during the games because such a ban is really alienating for a player,” he said.

TV replays showed Suarez bumping into the Italian defender while jostling for space in the penalty area, late in the second half. The Liverpool striker dropped his head into Chiellini’s shoulder and the Juventus defender immediately fell to the ground. Mexican referee Marco Rodríguez paid no heed to Chiellini’s attempts to pull his collar aside and show what appeared to be bite marks on his left shoulder.

This is not the first time Suarez finds himself banned for biting. In the past he was banned twice for biting opposition players. The first incident took place in 2010 when he was playing for Dutch club Ajax Amsterdam. He was suspended for seven matches for biting an opponent, and later was sold to English club Liverpool.

Before leaving for Liverpool, Suarez had apologised for the incident and vowed to display better behaviour. But his words meant little as in 2013 Suárez was caught on video, missed again by the referee, biting Branislav Ivanovic of Chelsea. The shameful incident earned him a 10-game ban and the three-member disciplinary panel made a point to criticize Suarez for not appreciating the “seriousness” of his actions. 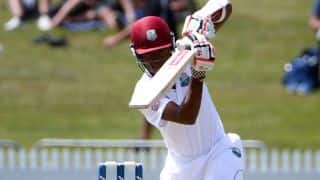