Luis Suarez was banned for nine matches by FIFA.

“We know the mistakes he’s made, but there’s another side to this person,” Xinhua quoted Tabarez as saying. “Many times you forget that the scapegoat is a person, who has rights,” he said. Suarez was found guilty by FIFA’s disciplinary committee of biting Italy’s Giorgio Chiellini during Uruguay’s 1-0 victory over the Azzurri, a result that secured the South American side’s place in the World Cup round of 16.

In addition, he was fined 100,000 Swiss francs (112,000 US dollars), suspended for nine competitive international matches and prohibited from all football-related activity for four months. The Liverpool striker also received a seven-match ban in 2010 for biting PSV Eindhoven’s Otman Bakkal. Last year, he was handed a 10-match suspension for the same offence against Chelsea’s Branislav Ivanovic.

In a 10-minute speech to the press, in which he refused to take questions, Tabarez announced his resignation from positions with FIFA’s strategic committee and technical study group. “It isn’t wise to be in an organization with those who exerted pressure to promote this decision,” the Celeste coach said. Suarez also won support from former Argentina great Diego Maradona, Brazil forward Fred and even Chiellini.

“At the moment my only thought is for Luis and his family, because they will face a very difficult period,” the Juventus defender said. “I believe that the proposed formula is excessive. I sincerely hope that he will be allowed, at least, to stay close to his team mates during the games because such a ban is really alienating for a player,” he said.

Uruguay and Colombia will meet at Rio’s Maracana stadium Saturday for a berth in the World Cup quarterfinals. 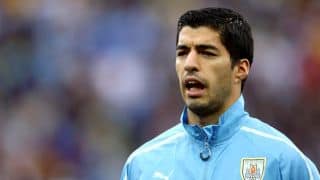