Hitzfeld took over as coach of the Swiss national team in summer 2008.

After Switzerland were eliminated from the FIFA World Cup 2014 by Argentina in the round of 16, coach Ottmar Hitzfeld announced his retirement on Tuesday.

“I’d like to congratulate my players for the way they reacted at the end. Today Switzerland earned the recognition of many people around the world and we can walk away with our heads held high,” said the 65-year-old German in the post match conference, reports Xinhua.

“As for my future, I’m retiring from coaching so I can lead a quieter life.”

Hitzfeld’s side held Argentina 0-0 in 90 minutes but failed to prolong the match to penalty shootout as Angel Di Maria’s winner in the 117th minute sealed the hard-fought victory.

Hitzfeld admitted their game plan was to strangle Messi with three or four players but it was a mistake to just concentrate on one player.

“It took a great finish to beat [Diego] Benaglio,” said Hitzfeld, hailing the outstanding performance of their goalkeeper from Bundesliga club Wolfsburg.

Hitzfeld took over as coach of the Swiss national team in summer 2008. Switzerland finished top of their qualifying group to reach the 2010 FIFA World Cup in South Africa, where they were eliminated after the group stage.

It was the first time for Hitzfeld to guide a team into the knockout round in World Cup.

Starting his coaching career in 1983, Hitzfeld has accumulated a total of 18 major club titles, mostly in his tenures with Grasshopper Club Zurich, Borussia Dortmund and Bayern Munich.

And he is also one of only five managers to win the UEFA Champions League [European Cup] with two different clubs, as he guided Dortmund to lift the trophy in 1997 and led Bayern Munich to cruise to the top podium in 2001. 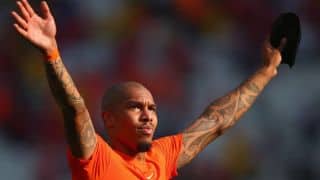