Uruguay defeat Italy 1-0 in FIFA World Cup 2014 to progress to Round of 16; Azzuri knocked out

Uruguay defeat Italy 1-0 in FIFA World Cup 2014 to progress to Round of 16; Azzuri knocked out

Marchisio was sent off for Italy and Godin scored off a set-piece to dump the Italians out of the tournament.

An 81st minute header from captain Diego Godin took Uruguay into the last-16 after a narrow 1-0 win over Italy in a FIFA World Cup 2014 Group D match at the Arena das Dumas.Italy, who just needed a draw to qualify for the knockout stage, lost Claudio Marchisio due to a red card incident in the 59th minute.

Uruguay still found the going hard except for a Luis Suarez shot that was brilliantly saved by Gianluigi Buffon. Godin had scored the all important goal at the Nou Camp against Barcelona that handed Atletico Madrid the Spanish La Liga title and the centre-back was at it again, bulleting a header from a corner that knocked Italy out of the tournament.

The ill-tempered affair was not short of controversies as Suarez, who was banned for a few Premier League games for biting Chelsea defender Branislav Ivanovic, was accused of taking another bite out of Italy defender Chiellini. It was a laboured performance from both teams with clear chances few and far between. Cesare Prandelli made four changes to the team that lost 0-1 to Costa Rica in Recife.

Thiago Motta, Antonio Candreva, Daniele De Rossi and Ignazio Abate were replaced by Leonardo Bonucci, Marco Verratti, Mattia De Sciglio and Ciro Immobile. Italy packed up the midfield in attempt to negate the Suarez effect and the Europeans powerhouse did just that starving the Liverpool forward of any space. Italy controlled the tempo early with Andrea Pirlo, Marco Verratti and Marchisio combining well in midfield.

Pirlo had his side’s first clear chance, forcing a finger-tip save from Fernando Muslera with a dipping free-kick. Uruguay responded as Alvaro Pereira got behind the defence and crossed for Edinson Cavani, who shot wide. The mercurial Mario Balotelli had a very poor match and his only contribution of note was a rash challenge on Pereira that got him a yellow card. Italy looked more fluent as the first-half progressed. Verratti, sitting deep alongside Pirlo, was particularly dangerous with his pace and fancy footwork.

Despite Italy’s early momentum, Uruguay looked ever-threatening on the counterattack. Suarez broke clear on goal after being played in by Nicolas Lodeiro, but the striker’s shot was blocked by Buffon. Italy had the lion share of the possession and that continued into the second half, while Uruguay defended deep and didn’t allow Italy to get any major attacking threat going. But the sending off for Marchisio changed all that. The midfielder made a sort of a stab at the opponent’s knee with studs showing that was deemed as a red card offence by the referee.

Uruguay finally threw men forward but still couldn’t break down the Italian wall. Suarez, though, did manage to sneak in on one occasion but his shot was brilliantly saved by Buffon. The goal finally came from a set piece and Godin rose the highest to score with a brilliant header. Italy threw caution to the wind and attacked the Uruguayan goal to find the equaliser but it was to no avail. 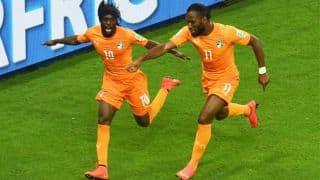 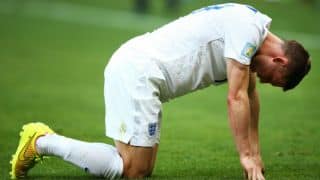