Ireland's hopes of reaching the final were ended by the result and the tournament hosts now face Bangladesh in a dead rubber.

Bangladesh beat the West Indies by five wickets in the one-day international Tri-Series on Monday to set up a final rematch between the teams in Dublin. Ireland’s hopes of reaching the final were ended by the result and the tournament hosts now face Bangladesh in a dead rubber on Wednesday.

Both Mushfiqur Rahim (63) and Soumya Sarkar (54) hit half-centuries as Bangladesh reached their target of 248 with five wickets and 16 balls to spare. West Indies had elected to bat and scored 247-9 in their 50 overs, with Shai Hope (87) and Jason Holder (62) leading the way.

But Mustafizur Rahman’s first four-wicket haul in eight months and Mashrafe Mortaza’s three wickets stole the momentum for Bangladesh. Soumya’s quick-fire innings came off 67 balls to get Bangladesh’s run chase off to a fast start. After they had lost three wickets in the middle-overs to Ashley Nurse, Mushfiqur put together two key partnerships.

Mushfiqur and Mohammad Mithun hit 83 for the fourth wicket before he and Mahmudullah put on 50 for fifth wicket to pave the way for the victory. The Windies have now lost twice to Bangladesh in a week and will be hoping for revenge in Friday’s final. 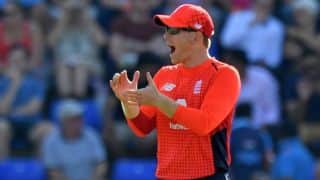