Jemimah Rodrigues was drafted into the U-19 team at the age of 13.

Jemimah Rodrigues, a product of Mumbai’s rich cricketing culture, broke new records in her whopping 163-ball 202-run knock (not out) in an ongoing U-19 ODI tournament. The 16-year-old right-hander was representing Mumbai in a 50-over domestic match against Saurashtra at Aurangabad. Jemimah, who was first drafted into the U-19 side at 13, has two centuries in this tournament and averages over 300 in the U-19 Super Leagues.

During Jemimah’s swashbuckling knock, the batswoman took on the opposition bowlers, and helped her team to an imposing 347 for 2 in the allotted 50 overs. Jemimah paced her innings brilliantly and accelerated after getting past 50. She also stitched a 200-run stand for the second wicket during her whirlwind innings.

Jemimah took a liking towards the game at a very early age. She started as a bowler before becoming a top-order batswoman. She normally opens the batting or comes out at the fall of the first wicket (at No. 3). The youngster was a quick learner from the beginning, and made a swift transition from plastic to the hard red ball after her fourth birthday. In addition, she also has the distinction of representing Mumbai at the U-17 level in hockey. 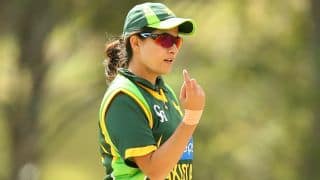