Poonam Yadav (4-0-26-4) derailed a spirited chase by Sri Lanka Women as India Women triumphed by 11 runs in the first T20I, at Free Trade Zone Sports Complex, Katunayake. Chasing 166, Sri Lanka openers Yasoda Mendis (32 in 12 balls) and captain Chamari Atapattu (27 in 22) added 39 in 18 balls. They needed a mere 97 from 78 balls when Yadav started the eighth over.

Yadav had Rebeca Vandort caught-behind with her first ball. Then Eshani Lokusuriyage ran a single, and off the next ball, Yadav had the dangerous Atapattu caught by debutant Arundhati Reddy. In her next over she bowled Shashikala Siriwardene, and in her fourth, she got Sripali Weerakkody.

Lokusuriyage (45 in 31 balls) kept the fight going despite the quick fall of wickets. The pressure eased somewhat after Harmanpreet Kaur sent down three wides in her first over, but Kaur struck back soon afterwards, having Kavisha Dilari stumped. Lokusuriyage hit her for a six later in the over, and Sri Lanka needed 12 off the last two overs.

Sri Lanka managed three off the first four balls off the 19th over, bowled by Radha Yadav. Then Lokusuriyage hit one back to the bowler. Kaur finished things off in the final over.

Earlier, India Women had posted 166 for 8 despite the failures of Smriti Mandhana (golden duck) and Kaur (two-ball duck). Jemimah Rodrigues (36 in 15 balls) launched a furious onslaught. After a mini-collapse, Taniya Bhatia (46), Anuja Patil (36), and Veda Krishnamurthy (21*) propelled India past 150. 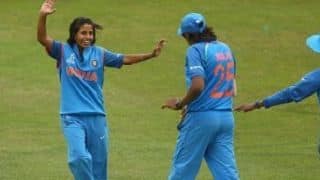