Sri Lanka won the toss and chose to bowl in Sunday's opening Twenty20 cricket international against Australia at the Adelaide Oval.

Sri Lanka won the toss and chose to bowl in Sunday’s opening Twenty20 cricket international against Australia at the Adelaide Oval. The match is the first of 21 T20 internationals for the Australians before they host the T20 World Cup next October.

Sri Lanka continue their rise after a 3-0 series win with a second-string side against Pakistan. “We don’t have much experience on the drop-in wicket, so we can bowl first to see what we need to do,” Sri Lanka skipper Lasith Malinga said at the toss. “The youngsters did really well in Pakistan and this is a good opportunity in these conditions ahead of the World Cup.”

Australia captain Aaron Finch said his side would have opted to bat. “It looks like a nice wicket,” he said. “I don’t think it will change over the 40 overs.”

Finch added that his side wanted to set up a platform for the World Cup campaign against the in-form Sri Lankans. “You want to be aggressive, no doubt,” he said. “We want wickets in the power play and we want runs in the power play. But then again, the last four overs are really important.”

Steve Smith and David Warner are both making their return to T20 internationals in Sunday’s match after their suspension for ball tampering in South Africa last year. Smith hasn’t played for his country in the short format since the 2016 T20 World Cup while Warner last appeared in a T20 international in March 2018.

After Adelaide, Australia face the visitors in Brisbane and Melbourne before Pakistan arrive for T20s in Sydney, Canberra and Perth. Sri Lanka hold a 5-1 T20I lead in Australia. 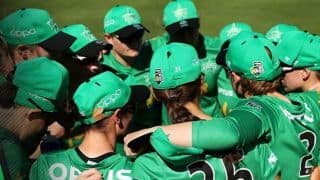 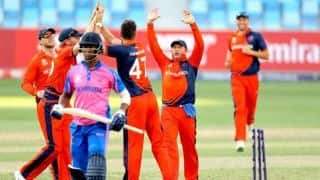