Rangana Herath became the third bowler in Test history to claim 100 wickets at a single venue as England were left struggling at 111/5.

Rangana Herath became the third bowler in Test history to claim 100 wickets at a single venue as England were left struggling at 111/5 after opting to bat in the first Test against Sri Lanka in Galle on Tuesday.

Herath, playing in his last Test, reached the milestone when he got rid of England captain Joe Root who yorked himself to be bowled for 35.

The record came after England were left stunned by pacer Suranga Lakmal’s twin blows in consecutive deliveries. He first removed debutant Rory Burns (9) and then saw the back of No. 3 Moeen Ali for a golden duck leaving them 10/2 inside three overs.

Root negotiated the hat-trick delivery and together with Keaton Jennings revived the innings. The duo counterattacked while adding 62 runs between them.

However the wicket of Root halted the recovery. Jennings, after scoring 46 off 53, misjudged one from Dilruwan Perera to be bowled. Ben Stokes also tried hitting his way out of trouble but saw his stumps shattered by Perera as he walked back on 7, leaving England 103/5.

Herath was given a guard of honour by his teammates in his farewell Test after England began their new era post the retirement of Alastair Cook and gave debut to top-order batsman Burns and wicketkeeper-batsman Ben Foakes.

Foakes didn’t have to wait long to get a taste of Test cricket when he walked out to bat after the fall of Stokes and was giving company to Jos Buttler when lunch-break was taken. 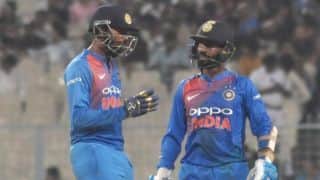 India vs West Indies 2018, 2nd T20I, LIVE Streaming: Teams, Time in IST and where to watch on TV and Online in India