After the first day was marred by rain, weather permitted two full hours of play in which England lost four wickets before lunch was taken with the scorecard reading 106/5.

Shannon Gabriel and Jason Holder each struck twice as West Indies claimed the opening session of the first Test against England in Southampton on Thursday. After the first day was marred by rain, weather permitted two full hours of play in which England lost four wickets before lunch was taken with the scorecard reading 106/5.

The play, unlike Wednesday, resumed on time today and Gabriel quickly got rid of both English overnight batsmen. Denly got an inside edge off a pacy delivery to be bowled on 18 off 58.

Gabriel again struck in his next over and this time ensnared Rory Burns who became just the first England opener after Alastair Cook to complete 1,000 Test runs. It was a well-directed yorker which Burns missed as he attempted a flick but umpire turned down the lbw shout before being forced to change his decision following a Windies review.

Captain Holder then beautifully set up Zak Crawley to have him lbw on 10 off 26. And then he had Ollie Pope out caught behind with another perfectly executed plan as he bowled one well outside the off stump with batsmen chasing it but only managing an edge.

England could have been in a worse shape had Kemar Roach held onto a difficult catch at fine leg giving England captain Ben Stokes a reprieve on 14.

Stokes (21*) was batting alongside Jos Buttler (9*) when lunch break was taken. 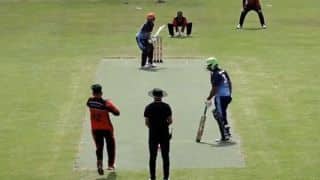 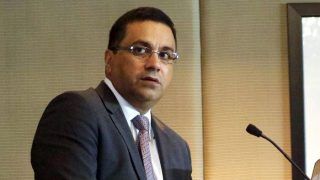