England scored 73 runs in the first session for the loss of 3 wickets to stretch lead to 250 against Sri Lanka.

A disciplined piece of bowling from Sri Lanka saw them pick up three wickets for 73 runs in the opening session of the third day of the first Test at Galle, but a resilient half-century from opener Keaton Jennings ensured that England strengthened their position in the match by stretching the lead to 250. The wickets to fall on in that session included that of Rory Burns, Moeen Ali and England captain Joe Root.

England, resuming the day at 38 for no loss, were in no hurry to score runs and were tied down by Dilruwan Perera and Suranga Lakmal. The fact that Sri Lanka’s bowling was tight can be gauged by the fact that the first boundary was scored when play entered the final 30 minutes of the session. England’s openers crossed 50 when Burns was run-out by a direct him and had to head back.

A that stage, England were ahead by just over 200 runs and Sri Lanka had a chance to break through. But Jennings was firm at his end, and he banished the disappointment of a mediocre series against India by bringing up a half-century off 111 balls. He was joined by Ben Stokes and the allrounder gave Jennings positive company. And while Stokes wasn’t fluent by all means, he absorbed 29 balls and looked somewhat assured compared to the other batsmen. 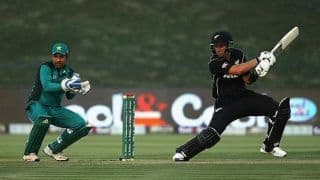