Jamieson, playing his maiden Test, couldn't have asked for a better start as he rocked India with the wickets of Pujara and Kohli. New Zealand seamers exploited the overcast skies of Wellington to trouble India, at one stage, reducing them to 40/3 before Mayank Agarwal and Ajinkya Rahane weathered the storm with a fighting partnership to take the score to 79/3 at lunch on Day 1 of the opening Test. Kyle Jamieson, playing his maiden Test, couldn’t have asked for a better start as he rocked India with the wickets of Cheteshwar Pujara and Virat Kohli.

Prithvi Shaw and Agarwal’s partnership endured another low score with Shaw cleaned up by Tim Southee by a lovely outswinger after the batsmen had hit a couple of early boundaries. In a testing first hour, Agarwal and Pujara were made to grind under cloud dover. Both batsmen were subjected to some top quality bowling from New Zealand’s seamers. After Trent Boult and Southee, Colin de Grandhomme and Jamieson continued to keep the two batsmen on their toes.

With Pujara and Agarwal’s partnership beginning to look promising, two-meter Jamieson produced a beauty. The ball pitched, moved slightly away, kissed the edge of Pujara’s bat and landed in BJ Watling’s gloves to give Jamieson his first Test wicket. His second was even more memorable as he had India captain Virat Kohli driving away from his body to edge the ball to Ross Taylor at first slip. Although he got a finger under the ball, he wasn’t going to drop this in his 100th Test.

With Pujara and Kohli back in quick succession, Rahane and Agarwal stuck their heads out and added 39 off 61 balls. A crisp boundary down the ground gave India their first boundary in 11 overs. Despite a few streaky fours from both batsmen, Agarwal and Rahane began looking a lot more assured and took India forward. 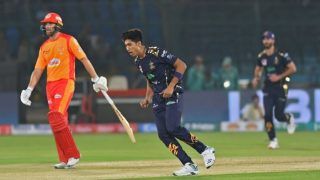