South Africa enjoyed a superb 2012 as they went to the top of the world Test rankings.  Meanwhile, after years of declining performances, the West Indies won the World Twenty20. 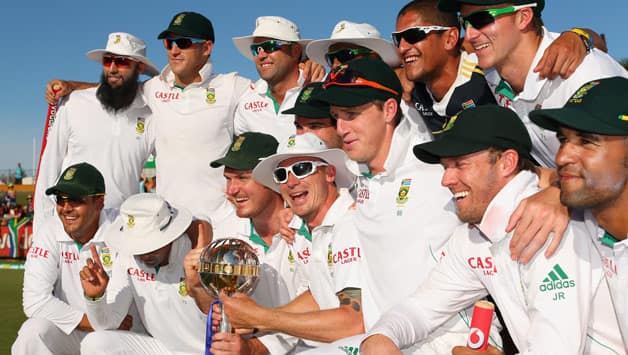 After whitewashing England 2-0 away in the summer to gain the world number one ranking in Tests, South Africa defended their position valiantly Down Under by beating Australia 1-0 © Getty Images

South Africa enjoyed a superb 2012 as they went to the top of the world Test rankings.

Meanwhile, after years of declining performances, the West Indies won the World Twenty20.

Unbeaten in 10 Tests, a notable nine away from home, South Africa ended England’s year-long reign at the summit with a convincing 2-0 win in a three-match series and then battled for two draws in Australia before a commanding 309-run victory in the third Test at Perth.

Graeme Smith, now the most-capped Test captain of all-time, scored a hundred in his 100th Test at The Oval and the same match saw Hashim Amla became the first South African to score a Test triple hundred.

However, there was one sadness for South Africa in the premature retirement of wicketkeeper Mark Boucher following a freak eye injury suffered against Somerset in a tour match.

With the Ashes in England set to be the key Test series of 2013, Smith was well-placed to assess both sides.

“The challenge for Australia is going to be winning in England,” said Smith. “Being a home series for England, they will be favourites.”

West Indies gave their long-suffering fans something to celebrate when they beat hosts Sri Lanka in the World Twenty20 final.

Marlon Samuels smashed 78 off 56 balls after a failure by Chris Gayle, who in November became the first player to hit a six from the first ball of a Test, against Bangladesh.

Batting records of a different sort fell to Michael Clarke, with the Australia captain becoming the first player to score four Test double centuries in a calendar year.

By contrast, runs dried up for Australia great Ricky Ponting, who could only manage eight in his final innings before retiring following the Perth defeat by South Africa.

However, he left with a tally of 13,378 Test runs — second only to Indian maestro Sachin Tendulkar.

But following his 100th international hundred in a one-day match against Bangladesh in March, runs became increasingly hard to come by for Tendulkar.

The concern surrounding the ‘Little Master’ appeared to inhibit an India side who suffered a 2-1 series loss to England in December.

It was India’s first home series defeat in eight years and England’s first in India since 1984/85, with Alastair Cook starring with the bat after succeeding retired former opening partner Andrew Strauss as England captain.

Cook’s influence could also be seen in the “reintegration” of Kevin Pietersen into the side after the South Africa born-batsman was dropped for sending “provocative” texts to Proteas players regarding then-captain Strauss.

Pietersen responded with a superb innings of 186 against India in the second Test at Mumbai.

Fixing continued to plague world cricket, with Pakistan and Essex leg-spinner Danish Kaneria banned for life by the England and Wales Cricket Board (ECB) after being found guilty of corruption.

Kaneria’s Essex colleague Mervyn Westfield was jailed for four months and banned for five years after pleading guilty to an ECB charge of accepting money to under-perform.

And in a worrying development six umpires from Pakistan, Bangladesh and Sri Lanka, were suspended by the International Cricket Council following allegations by an Indian television programme they could be bribed to make decisions.

Pakistan beat England in their adopted home of the United Arab Emirates and the year ended with Bangladesh agreeing to tour Pakistan in early 2013.

That what would see the first full international fixtures played in Pakistan since an armed attack on Sri Lanka’s team bus in Lahore in March 2009 killed eight people and injured seven players.

Ross Taylor led New Zealand to their first Test win in Sri Lanka for 14 years but was still axed as captain.

New Zealand officials apologised for the manner of his sacking but by then Taylor, the team’s best batsman, had made himself unavailable for the tour of South Africa.

In another largely tough year for Bangladesh there was the satisfaction of a one-day series win against the West Indies.

Bangladesh’s Abul Hasan became only the second man in 135 years of Test cricket to score a hundred on his debut batting at No 10 when making 113 against the West Indies in Khulna — only for the bowler to ‘give the runs back’ with a first innings return of none for 113.