Tahir is currently contracted to Cricket South Africa (CSA) until July 31st, and will re-assess his freelance future following the tournament.

I have always wanted to play in the World Cup, said Tahir. It would be a great achievement for me to play for this great team. I have a mutual understanding with Cricket South Africa and going forward I decided that I would finish at the World Cup, that is why I am contracted until then.” (ALSO READ: Imran Tahir, Faf du Plessis power Proteas to 8-wicket win)

The 39-year-old said he would still like to play T20Is for South Africa ahead of the 2020 ICC T20 World Cup in Australia, but would like to open up more opportunities for other fledgling spinners in the country in the 50-over format.

I would love to play for as long as I can, he admitted. But there is a stage in your life where you have to make big decisions, this is one of those big decisions, it is definitely the biggest decision of my life. I also feel there are a couple of good spinners in the country who need the opportunity. We are fighting for the same spot, but looking to the future, they will have more opportunities to play for South Africa.

Tahir was instrumental in SA s eight-wicket win in the first ODI against Sri Lanka on Sunday, producing a strong return of 3/26 in a match-changing performance. He looked back to his best following a quiet series against Pakistan, and hopes to continue with the form in an important season.

I felt really good, he said of his performance on Sunday. I always want to take wickets in every game that I play and it happened yesterday. I am grateful that I played my role for the team.

The second ODI takes place at SuperSport Park in Centurion on Wednesday. Play is scheduled to start at 13h00 local time. 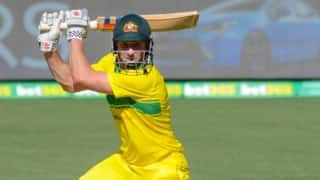 Shaun Marsh set to be back for 2nd ODI