New Zealand was the better team in the semifinal against India.

New Zealand gun fast bowler Lockie Ferguson has admitted that the 2019 World Cup semifinal match against India was one of the craziest games he has ever played in his career. The match was played over two days as New Zealand stunned India by 18 runs. The Kiwis scored 239-8 while batting first whereas India lost early wickets to fall behind the eighth-ball.

MS Dhoni and Ravindra Jadeja gave a glimpse of hope to the Indian team with their alliance of 116 runs but New Zealand was able to get over the line. Dhoni was run out by Martin Guptill and that was the turning point of the game.

Lockie Ferguson said on YouTube Channel Cricket Life Stories, “That was one of the craziest games I have ever played. (The match was played) over two days. We scored some 240-odd (239 for 8) and it was such an interesting vibe because we thought 240 was an okay score. We sort of got the feeling from India that they knew we hadn’t got enough, with their batting attack. Then we went and slept on it that night. My girlfriend was with me at that time. We were talking about it and she asked me if I was nervous. I said, ‘we have still got nothing to lose at this point because we have got runs on the board and all the pressure is on India’.”

New Zealand skipper Kane Williamson scored 67 runs whereas Ross Taylor contributed with 74. It looked like India will cruise to the target but they were reduced to 5-3 by New Zealand fast bowlers. Matt Henry dismissed KL Rahul and Rohit Sharma and then Virat Kohli was plumbed in front of the wickets by Trent Boult. Ferguson, who returned with 1-43 in his 10 overs in that game, added that Boult and Henry bowled one of the best opening spells.

“Trent Boult and Matt Henry bowled one of the best opening spells I have seen. They knocked the top off and really put the pressure back on India. Yes, an amazing game of cricket. It was pretty special to get the win and go through to the final. And the final, it was the longest one-day game of cricket I have ever played.”

New Zealand went on to lose the final against England on boundary count rule. 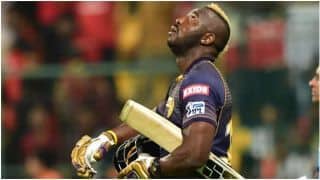