The pitch at County Cricket Ground, Taunton drew flak after 22 wickets fell on Day One in a County Championship match between Lancashire and hosts Somerset. Opting to bat, Lancashire reached 47 for 1 before left-arm spinner Jack Leach (who had played a Test at Christchurch earlier this year) routed them with figures of 5 for 28. Leach was supported by pacer Jamie Overton, who claimed 3 for 28. Lancashire were bowled out for 99.

Somerset themselves found in trouble against Graham Onions (3 for 40), who took out the big guns Marcus Trescothick and Azhar Ali early. With Keshav Maharaj (4 for 65) turning the ball at odd angles, James Hildreth launched a counterattack before perishing for a 27-ball 32. Lewis Gregory kept the onslaught going, and top scored with a 73-ball 64, dragging Somerset from 104 for 9 to 192, adding 33 with Overton and another 55 with Leach.

Somerset opened bowling with Leach straight away. Leach turned one the proverbial mile to get Alex Davies and had night-watchman Mark Parkinson caught three balls later. Lancashire limped to 7 for 2 by stumps.

Somerset head coach Jason Kerr, however, does not agree that the pitch was poor, as he told ESPNCricinfo: “I am not worried about any possible penalty over the pitch because our last wicket pair put on nearly 60 and showed what could be done on it.

“Jack Leach claimed five first innings wickets, but he would be the first to admit he didn’t bowl that well and there was some very poor batting by both sides. If you look at how the wickets fell, a lot of it was through very bad cricket. I was very disappointed with the way we batted because there was the opportunity to establish a very big lead.

“I have not spoken to the Cricket Liaison Officer and probably won’t do so until the end of the game, but I don’t foresee a problem. Let’s see how the pitch plays tomorrow and for the rest of the match.”

Elsewhere, at St Lawrence Ground, Canterbury, hosts Kent crashed to 137 against Northamptonshire at in an almost identical day of cricket. Nine of the ten wickets were shared by the pace trio of Ben Sanderson, Nathan Buck, and Richard Gleeson.

Then Matt Henry scythed through the top order, taking 6 for 31 to leave Northants reeling at 44 for 8. Some gutsy batting from Ben Hutton and Gleeson helped them reach 71 for 8, but Kent finished with an upper hand. 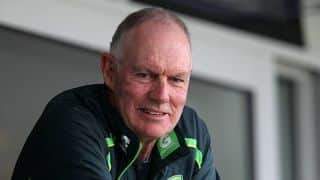