Bridgetown (Barbados): West Indies Cricket Board (WICB) director Richard Pybus has said a weekend workshop which attracted about 25 coaches from around the region is expected to help identify players with suspect bowling actions. A number of former West Indies cricketers, including Winston Benjamin, Roberts Samuels and Tony Gray also attended the training, which Pybus said was also designed to help players to remedy questionable bowling actions, reports CMC. The sessions were held at the West Indies High Performance Centre at the Cave Hill Campus of The University of the West Indies in Barbados on Tuesday. WI selectors told I was not picked because of how I look on TV, says Rampaul

“The aim is to help our coaches firstly identify players with suspect bowling actions and then the remedial work required afterwards. It has been excellent, very stimulating, very thought-provoking, and very necessary for the region,” said Pybus on Tuesday. “We have to make sure that as our players grow, we are able to support them. We would like to build on this as we look to nurture our players assist with our coaches’ education programme.” West Indies cricket can be improved by preparing good pitches: Tino Best

The participants of the two-day session were also involved in the Level III coaching course hosted by the WICB in collaboration with the England & Wales Cricket Board (ECB). Richard Done, the International Cricket Council’s (ICC’s) high performance manager, conducted the programme “Identifying and Rehabilitating Suspect Bowling Actions”. “We looked at principles of bowling and how you can assist any bowlers who have suspect bowling action,” said Done. West Indies Cricket Board agreed to play day-night Test in UAE, says PCB

“The programme was all about coaches’ education and how we can get better at doing the job of coaching and assisting the players under our watch.” Several West Indies international players have been called for suspect bowling actions in recent years including Sunil Narine, Marlon Samuels and Shane Shillingford. 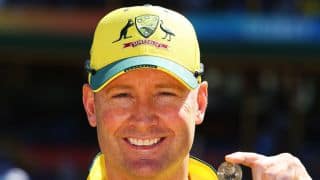