Oman put in a vastly improved batting performance in the second match against Scotland, after they were bundled out for a mere 24 runs in the first match on Tuesday, beating the visitors by 93 runs at the Al Amerat Cricket Ground Oman Cricket (Ministry Turf 1) on Wednesday.

Mohammad Nadeem and Khurram Nawaz made fifties as Oman posted 248/8, before the bowlers – led by Badal Singh (3/25) bowled out Scotland for 155.

After being put into bat Oman lost opener Twinkal Bhandari for 15 to pacer Alasdair Evans but skipper Khawar Ali and opener Jatinder Singh added 38 runs for the second wicket. Singh was run out for for 30 off 44 balls but Ali found support in Mohammad Nadeem as the duo put on 65 runs for the third wicket.

Scotland made a brief comeback with quick wickets as Oman lost three wickets for just 18 runs, including the wicket of Ali for 44.

But No.7 batsman Khurram Nawaz revived Oman s innings with a power-packed knock of 64 off 45 balls, including five sixes and three fours to push Oman s total to 248/8.

In chase, Scotland were jolted early losing both their openers inside the first five overs. Matthew Cross was removed by Kaleemullah while skipper Kyle Coetzer was sent back by Bilal Khan. Callum MacLeod and Berrington tried to steady the innings but Badal Singh removed MacLeod for 14, followed by the wicket of Berrington for 37.

George Munsey and Watt added 34 and 36 runs, respectively, before Nadeem polished off the tail as Scotland were all out for 155 in 40 overs. Nadeem finished with 3/38 while Kaleemullah and Bilal picked two wickets each 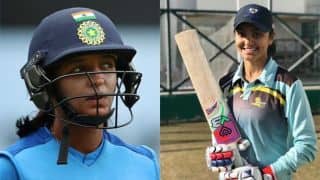