Mandhana shepherded a modest chase with a composed half-century after Pandey and Goswami had skittled England women for 161.

Smriti Mandhana shepherded a modest chase with a composed half-century to guide India women to a seven-wicket win over England and seal the series. Mandhana took charge after India seamers Shikha Pandey and Jhulan Goswami had shared four wickets to skittle England for 161, a total which they chased down with 53 balls to spare. (READ: 1st ODI – Bisht spins India to 66-run win)

Mandhana and Punam Raut steadied India after Jemimah Rodrigues was dismissed without opening her account. Mandhana, continuing her stellar form, was off the mark with a boundary off her third ball before settling into a steady partnership of 73 with Raut. Mandhana’s two boundaries off three balls off Georgia Elwiss – both drives a treat to watch. Mandhana ‘s next boundary was the one that brought up her fifty – her 15th in ODIs. (READ: 2nd ODI – Pandey, Goswami floor England women for 161)

Raut began with a sketchy boundary that flew off the edge of her bat before starting to gain confidence. Dropped on 26, Raut swept the spinners with ease and rotated the strike well with Mandhana. Picking her spots perfectly, Raut cashed in on the poor deliveries – a full toss from Sophie Ecclestone was dealt with a boundary and seemed to be in good rhythm before she was out stumped to Elwiss – through a lightning quick stumping down leg side from Sarah Taylor.

With India still 88 shy of the target, skipper Mithali Raj bided time before bringing out the shots. Her first boundary was a square drive off Elwiss and second swept on the leg side. Mithali and Mandhana took the team close to the target with a partnership of 66 runs before the openers was out LBW to Anya Shrubsole. Deepti Sharma and Mithali knocked off the remaining runs shortly after to hand India the series.

India had the upper hand in the match from the beginning. Pandey produced career-best figures of 4/18, aided well by her new-ball partner Goswami (4/30). Opting to bat first, England’s batting order never looked to be in control and kept losing wickets at regular intervals. Their 161 could have been even smaller had it not been for Natalie Sciver’s 85, which accounted for nearly 50 percent of the team’s total. She batted defiantly with the tail and with Alex Hartley registered the highest final wicket stand for England.

Pandey and Goswami snuffed out England’s top order with tremendous accuracy. Pandey struck in her first over with the wicket of opener Amy Ellen Jones, and Goswami followed it up by dismissing wicketkeeper batter Taylor. Skipper Heather Knight became Goswami’s second wicket and Pandey picked up her second by removing Tammy Beaumont shortly after, which left England hurting at 44/4.

Sciver and Lauren Winfield resisted the Indian attack and with the spinners Sharma and Ekta Bisht operating bided time to stitch a promising 49-run partnership. Seven short of 100, Poonam Yadav broke the partnership getting Winfield out caught by Mandhana, opening the gates for another mini collapse. Pandey struck twice in three balls and Poonam trapped Shrubsole as England slumped to 108 for 8.

Sciver farmed most of the strike and held the innings together, getting to her half-century off 78 balls with a boundary off Bisht. Dropped on 42, Sciver made it count everytime India erred – three no balls for example. Goswami and Poonam reduced England to 119 for 9 but Sciver added crucial 42 runs with last batter Hartley, who remained unbeaten on 0. It was in final few overs in which Sciver really shifted gears before being given out LBW to Goswami. 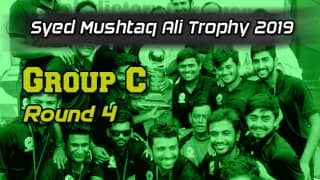