Dale Steyn marked a successful return to ODIs after almost two years, scoring maiden one-day international fifty and picking two wickets, but it was Imran Tahir s six scalps, including a hat-trick, that stole the spotlight in South Africa s 120-run win over Zimbabwe at Bloemfontein on Wednesday that saw the hosts take an unassailable 2-0 lead in the three-match series.

Batting first on a vicious pitch that would crumble with every delivery, South Africa were reduced to 26/3 in the eighth over. Opener Aiden Markram tried to put on a fight during a sedate 49-ball 35, but he was nipped out by pacer Donald Tiripano. Pace bamboozled the South African batsmen as the hosts slumped to 92/6 in the 21st over. Christiaan Jonker scored a quick 19-ball 25, but perished to leggie Brandon Mavuta, who snapped three wickets. Skipper JP Duminy too couldn t survive the heat as he departed for five with none of the South Africa top order registering noteworthy contributions.

It took a 75-run partnership between Steyn and Andile Phehlukwayo to steer the innings to safety. Phehlukwayo departed after he was caught behind off Tendai Chatara, but Steny held on to notch 60 from 85 balls as South Africa were bowled out for 198 in 47.3 overs. It was South Africa’s second-lowest score against Zimbabwe in ODIs.

In reply, Zimbabwe were never really in the run chase and went down like nine pins. Steyn trapped opener Solomon Mire (2) leg before. Skipper Hamilton Masakadza (27) and Craig Ervine (3 off 24) tried to put on a fight, but succumbed to Lungi Ngidi and Steyn respectively. Imran Tahir then claimed responsibility for Zimbabwe s remaining six wickets. He also picked a hat-trick in the 20th over. Tahir had Peter Moor, Brandon Mavuta and Kyle Jarvis to accomplish the feat. Zimbabwe were bundled out for 78, with Tahir claiming the last wicket of Chatara, who was caught by Steyn at deep midwicket to complete the rout.

South Africa next face Zimbabwe in an inconsequential final ODI at the Boland Park, Paarl on October 6. 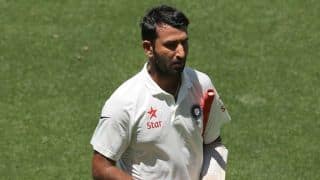