Pakistan skipper Sarfaraz Ahmed won the toss and opted to bat in the second day-night ODI match against Sri Lanka in Karachi.

Pakistan captain Sarfaraz Ahmed opted to bat first in the second ODI against Sri Lanka at the National Stadium in Karachi on Monday. The series opening fixture at the same venue was washed out without toss on Saturday.

Karachi has not hosted a an international cricket match since 2009 when Sri Lanka played two back-to-back matches. Later that year, a terrorist attack on the Sri Lankan team resulted in Pakistan losing out on home matches as teams expressed reluctance to tour the country on account of security issues.

This is the second match of the three-match series and will be followed by three Twenty20 internationals in Lahore next month. 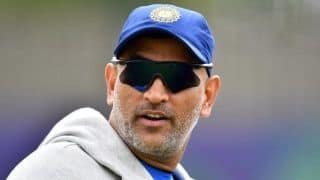 MS Dhoni has made Ranchi famous in the world of cricket: President Ram Nath Kovind