Pakistan bowlers restricted New Zealand to 209/9 in the second ODI at Sheikh Zayed Stadium, Abu Dhabi with youngster Shaheen Afridi claiming 4/38 in his nine overs, ably supported by the spin duo of Mohammad Hafeez (1/31) and Shadab Khan (1/25) on Friday.

For New Zealand, former skipper Ross Taylor put up a lone resistance, scoring an unbeaten 86 off 120 balls.  Henry Nicholls added the second-best score for NZ with a 63-ball 33-run knock.

After opting to bat first, New Zealand lost opener Colin Munro to Afridi for 13 in the second over of the match followed by an unlucky dismissal of Kane Williamson – run-out at the non-striker’s end – when Afridi got a touch off George Walker’s straight drive on to the stumps and Williamson was out of the popping crease. He went for one.

Worker was undone by Hafeez in the 15th over after scoring 28 off 50 balls followed by the wicket of Tom Latham in the next over – castled by Afridi – for one. That left NZ reeling at 73/4.

Taylor and Nicholls revived NZ with stand of 75 runs, but that took 21.1 overs for the duo to conjure up the runs as Pakistan spinners kept a check on the run-rate. Hasan Ali reaped the rewards as he knocked over Nicholls – who tried to break the shackles – in the 38th over.

Tim Southee and Ish Sodhi hung around for a bit scoring 13 runs each as Taylor notched up his 43rd ODI fifty. Afridi returned for fresh spell and sent back both Sodhi and Southee. Taylor remained unbeaten taking NZ’s total past 200. 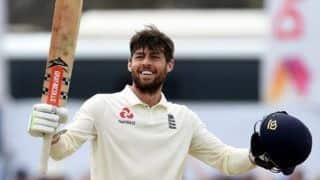