Haider remained unbeaten on 66 off 43 to take his team to the winning line.

Pakistan cruised to an eight-wicket win over Zimbabwe in the second T20I in Rawalpindi on Sunday. Zimbabwe were limited to 134/7 with spinner Usman Qadir and fast bowler Haris Rauf taking three wickets each. Chasing the moderate target, Pakistan captain Babar Azam and young Haider Ali then scored half-centuries as the hosts managed to register the win with 29 balls to spare.

Pakistan have taken an unassailable 2-0 lead in the three-match series.

Rauf made the early breakthroughs with the wickets of openers Brendan Taylor and Chami Chibhabha in the first four overs. His third wicket would come in the 19th over in the form of Donald Tiripano. Qadir, meanwhile, kept up the pressure in the middle overs, dismissing Wesley Madhevere, Sikandar Raza and Elton Chigumbura. For Zimbabwe, Ryan Burl was the top-scorer with unbeaten 32 off 22 balls. Apart from him, Wesley Madhevre managed to score 24 off 22.

Babar opened the batting with Fakhar Zaman, who was dismissed in the third over by Blessing Muzarabani. Haider then joined his captain and the pair put up a partnership of 100 runs. It was Babar’s second fifty in a row as he is eyeing to retain the top spot in ICC T20I rankings. The skipper fell to Muzarabani on 51 off 28 balls in the 13th over, his innings was laced with eight fours and six. While Haider remained unbeaten on 66 off 43 to take his team to the winning line alongside Khushdil Shah (11). He slammed six fours and three sixes during his magnificent knock. 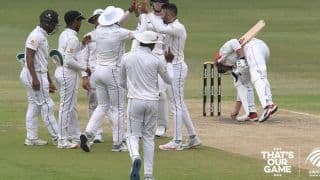