A rampant Jimmy Neesham and Martin Guptill carried New Zealand to a competitive 176 for eight after being sent into bat first in the second Twenty20 international against England in Wellington on Sunday.

Guptill, at the top of the innings clouted 41 off 21 deliveries, while Neesham moved the scoreboard with 42 off 22 balls, including four sixes, before he was removed on the final ball of the innings.

With New Zealand pushing to square the series after losing game one by seven wickets, Colin de Grandhomme blasted three sixes in his impressive 28 from only 12 balls while Ross Taylor chimed in with 28 but at a slower scoring rate. After Guptill and de Grandhomme’s lusty hitting, New Zealand reached the halfway stage at 96 for three, but tight bowling from Sam Curran and Chris Jordan put the brakes on scoring as the innings wore on.

Jordan returned figures of three for 23 while Curran took two for 22. The cluster of newcomers in the England ranks had mixed fortunes with the ball and six droPreview (opens in a new tab)pped catches, three by James Vince also proved costly for the tourists.

Saqib Mahmood, on debut, saw his second delivery on the international stage smacked over the long-on boundary by Guptill and Colin Munro finished the over with a six over mid-wicket. Mahmood did claim the wicket of Tim Siefert for 16 but his maiden wicket came at an expensive 46 runs from his four overs.

Munro faced only three more balls after his huge boundary before he was trapped in front by a Curran yorker. Pat Brown, who took one for 33 in his debut in Christchurch two days ago, proved much more expensive in his second outing, conceding 32 off two overs. Allrounder Lewis Gregory, who did not get to bat or bowl in his debut in Christchurch, bagged a wicket with his first ball in international cricket when he bowled Colin de Grandhomme for 28. 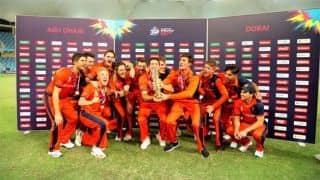