Haris Sohail hit his best Test score and Babar Azam was one away from a first century as Pakistan reached 356/4 at tea on the second day of the second Test against New Zealand in Dubai on Sunday.

Sohail was unbeaten on 143 while Azam was 99 not out as the duo thwarted New Zealand’s bowling during their unbroken 182-run stand on a grassless Dubai stadium pitch.

The Pakistani batsmen added 82 between lunch and tea, scoring faster than in any of the pervious sessions.

Sohail has so far hit 13 boundaries in a marathon 411-ball stay.

He took 309 balls to reach three figures and then waved his bat toward the dressing room, apparently pointing to his team-mate Azhar Ali who was run out after a mix-up with Sohail on Saturday.

Azam has ably supported Sohail, having so far smashed a six and ten boundaries.

Pakistan, resuming at 207/4, needed a big partnership to put pressure on New Zealand and Sohail and Azam responded well.

Medium pacer Colin de Grandhomme has figures of 2/44 while left-arm spinner Ajaz Patel, who took seven wickets in the first Test, has taken one wicket for 91. 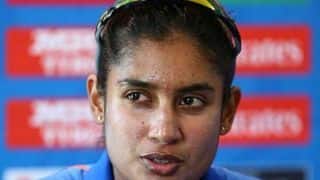