The third ODI will be played on October 19

Australia A women s team registered a comprehensive four-wicket win over India A women on Wednesday to take an unassailable 2-0 lead in the three-match ODI series at the Bandra-Kurla Complex ground in Mumbai. The visitors had won by their opening match on Monday by 91 runs.

Opting to bat, India skipper Punam Raut bounced back after departing for nought in the previous game. Raut top scored with 64 off 99, but failed to receive any support from the other end and departed after she was picked up by Tahlia McGrath in the 32nd over. India A women were in dire straits at 107/7, but India international Mona Meshram managed to salvage the side from posting a humiliating target. Meshram notched 59 off 71 as the home side finished their innings at 197/7. Shikha Pandey, who scored a 42 on Monday, was run out by Naomi Stalenberg for just eight. Australia A skipper Molly Strano returned with three for 23, identically similar to her figures in the first game.

The Australian run chase was not without any drama. Both openers, Georgia Redmayne (22) and Chloe Piparo (9) were back in the hut in 11 overs. Heather Graham and McGrath then combined to stitch a 74-run partnership. Despite Pandey breaking the stand in the 23rd over after claiming the wicket of McGrath (47), Graham batted on with the tail to finish at an unbeaten 87-ball 67 as Australia romped home in 40.3 overs. Pandey returned with figures of 3 for 38 in her 10 overs.

The final and inconsequential ODI will be played on October 19 at the same venue. 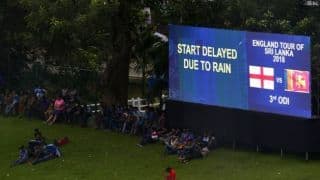