Mayank Agarwal and Umesh Yadav will look to get into the groove when India A take on West Indies A in the 2nd unofficial Test.

Opener Mayank Agarwal and pacer Umesh Yadav will look to get into the groove when India A take on West Indies A in the second unofficial Test beginning in Port of Spain from Wednesday with an aim to take an unassailable 2-0 lead in the three-match series.

With Shreyas Iyer and Navdeep Saini joining the senior team in the US for the T20s against West Indies, Test specialists like opener Agarwal and speedster Umesh, who are already in the Caribbean, will play the second four-day game in their absence.

Both Agarwal and Umesh are part of India’s squad for the Tests against the West Indies. Earlier, Agarwal was picked in the A squad only for the third unofficial Test from August 6 before joining the senior team for the series opener beginning August 22.

The six-wicket win for India A in the series opener was mainly down to the efforts of bowlers especially left-arm spinner Shahbaz Nadeem, who took five wickets in both the innings. Pacer Mohammad Siraj too was amongst the wickets, taking five in total.

The game will be another opportunity for Shubman Gill to make a statement after being overlooked for the West Indies series. Both Gill and Priyank Panchal got starts in the first game but could not convert.

The biggest positive to have come out of the game was the performance of comeback man Wriddhiman Saha, who looked good with bat and behind the stumps.

Captain Hanuma Vihari did not get going in the series opener and he would like to get a big one ahead of the Test series. 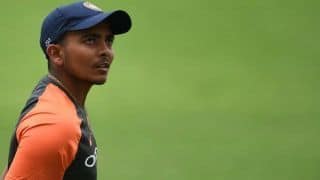