New Delhi [India]: The International Cricket Council (ICC) on Sunday responded to a documentary by a Middle-East television channel alleging pitch doctoring and match fixing in three Test matches. The ICC’s anti-corruption unit said that it is taking the allegations extremely seriously and an investigation is underway.

“The ICC has now had the opportunity to view the documentary into corruption in cricket and as we have previously stated, we are taking the contents of the programme and the allegations it has made extremely seriously. A full investigation led by the ICC Anti-Corruption Unit, working with full cooperation from all Member countries identified in the programme, is now underway to examine each claim made,” Alex Marshall, ICC general manager, anti-corruption unit said.

He, however, requested the television channel to comply and share the un-edited video with the Council. “We have been in ongoing dialogue with the broadcaster which has refused our continual requests to cooperate and share information which has hampered our investigation to date. The content of the programme, is of course useful to the investigation, but I would now urge the production team to provide us with all un-edited and unseen evidence they are in possession of, to enable us to expedite a thorough investigation,” Marshall added.

A Middle-East television channel recently carried out a sting operation which alleged pitch doctoring in three Test matches, which India played. The matches in question are India vs Sri Lanka (Galle, July 26-29, 2017), India vs Australia (Ranchi, March 16-20, 2017) and India vs England (Chennai, December 16-20, 2016).

While India won the match against Sri Lanka and England, the match against Australia ended in a draw. The channel also alleged the involvement of some Australian and England players in spot-fixing. The Indian connection to the latest scandal is a former Mumbai cricketer Robin Morris, who is now alleged to be a match-fixer.

In the sting operation, Morris is seen introducing a pitch curator to the undercover reporter. He is also boasting about getting pitches doctored as sought by fixers.

Meanwhile, the Board of Control for Cricket in India (BCCI) said that it has a zero-tolerance approach to any activity or act that brings the game of cricket to disrepute or mars the integrity of the game.

First Published on
Last updated on May 28, 2018 8:41 AM IST
TOPICS:
India ICC BCCI International Cricket Council Board of Control for Cricket in India pitch fixing 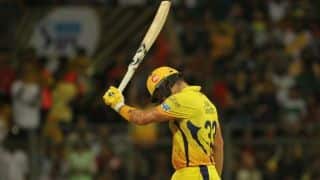