In India alone, the India versus Pakistan encounter rated 17.3 across the Star Sports network and Doordarshan, the best rated T20 match ever since the 2007 World T20 final, reaching 83 million people

The recently-concluded World Twenty20 has set records galore across broadcast and digital platforms with 320 million video views recorded across ICC digital properties and social media pages. The tournament, which was won by the West Indies men’s and women’s teams, was the first major ICC event produced by ICC TV. It involved coverage of 48 matches across seven venues in India using 30 cameras at each venue. ICC’s broadcast partners across the world also delivered record ratings and viewership. In India alone, the India versus Pakistan encounter rated 17.3 across the Star Sports network and Doordarshan, the best rated T20 match ever since the 2007 World T20 final, reaching 83 million people. And the cumulative in-home viewership for the event in India was 730 million, an increase of 114 per cent over the previous edition. ALSO READ: Mahmadullah takes blame for Bangladesh’s loss to India in the T20 World Cup 2016

In Pakistan, on TEN Sports, India v Pakistan rated 14.5, a 100 per cent increase to the same encounter in the 2014 edition that took place in Bangladesh. South African-based broadcaster SuperSport saw ratings that increased by 32 per cent compared to 2014, while in the UK, the men’s final saw a peak audience of 2.45 million, which is a record for any cricket match broadcast on Sky Sports. ALSO READ: Martin Guptill: West Indies T20 World Cup 2016 triumph will impact CPL 2016

And in the US, on Willow, the coverage was watched in over 1.4 million television households. Across the official event website and App, ICC’s YouTube channel, ICC’s Facebook page, ICC’s Twitter and Instagram account and the regional and global live stories posted on Snapchat, there were more than 320 million video views the highest mark ever for an ICC event.

During the event, 46 million people across the world engaged on Facebook, while the 85 press conferences streamed live on ICC’s Facebook page had more than 10 million views. On Twitter, there were 5.75 billion impressions of Tweets related to the event and the ICC Instagram page tipped the one million follower mark.

ICC Chief Executive David Richardson said: “The dynamic and fascinating cricket on field was matched by the innovative presentation of the world feed broadcast and the efforts of our broadcast partners, which delivered record viewership numbers. The data on the digital activities was equally stunning and it all added up to make the event a hugely successful one.” 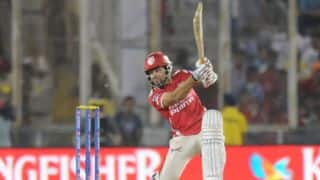