Australia almost made a mess of yet another easy chase but held on this time around to salvage some pride and the top-ranking as they beat England by five wickets in the third and final T20I in Southampton on Sunday. After being put in to bat first, England posted 145/6 with opening batsman Jonny Bairstow hitting 55 off 44.

In reply, Australia were driven over the line by Mitchell Marsh, playing in his first match of the tour, with an unbeaten 39 off 36 as they achieved the target with three balls to spare.

Both the teams made a host of changes. For England, two were forced with their limited-overs batting linchpin Jos Buttler leaving the bio-secure bubble to be with his family and captain Eoin Morgan also missing after dislocating a finger in the previous game.

In their place Joe Denly and Sam Billings walked in while Moeen Ali made his T20I captaincy debut and Tom Banton was promoted up the order to open alongside Bairstow.

Australia made three changes, resting David Warner and Pat Cummins while dropping Alex Carey. In their place, Matthew Wade, Josh Hazlewood and Marsh got the chance.

England lost Banton in the second over to Hazlewood before Bairstow and Dawid Malan led the recovery with a 49-run partnership. Denly’s unbeaten 29 off 19 pushed them to a decent total but considering the previous scores on this pitch, it looked 10-15 runs short.

Australia though made an aggressive start with Matthew Wade taking on Jofra Archer with a huge six but his stint was short-lived as he fell to Mark Wood for 14 off 9.

Captain Aaron Finch and, Marcus Stoinis then took over as the pair guided Australia to 61/1 in the Powerplay overs.

Just when it seemed the tourists had the chase under control, a mini-collapse followed as they lost four wickets – three of them to Adil Rashid – for the addition of just 30 runs.

Marsh held nerves and saw through the chase in the company of Ashton Agar who made 16 off 13. 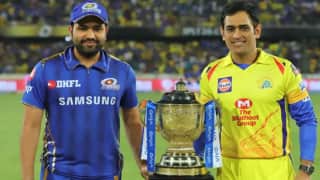 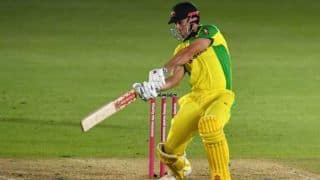 ENG vs AUS: Loved Finishing Off The Game And Contributing to a Great Win, Says Mitchell Marsh